You are here: Home / Mediterranean / The “covert war” between Israel and Hezbollah-Syria-Iran 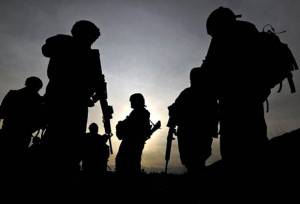 A high stakes covert war between Israel and Iran-Hezbollah-Syria has the potential to erupt into an overt clash, and the risk of this occurring has risen somewhat in recent days, though all sides have an interest in preventing such a scenario.

Israel’s defense establishment, it is safe to assume, strenuously weighs the risks and benefits of each covert strike before launching it. Such action is part of an ongoing, daily effort to prevent Hezbollah from acquiring high-quality, often precision guided weaponry, that will enable the Shi’ite terrorist organization to pose intolerable threats to Israeli security.

Hezbollah has, in recent months, signaled that it is changing the rules of the game, and that it will no longer allow covert strikes to pass without retaliation on its part. This was evident in January, when an air strike that killed 12 senior Hezbollah and Iranian Revolutionary Guard Corps operatives in southern Syria, as they prepared to set up a militant base to target Israel, led Hezbollah to launch a missile ambush on an IDF convoy, killing an officer and a soldier.

Had the death toll from Hezbollah’s attack been higher, a more forceful Israeli response could have followed, leading to a potential generalized escalation. Both sides had an interest in keeping the clash under control.

As former IDF deputy chief of staff Maj.-Gen. (res.) Yair Naveh told The Jerusalem Post in March, “Here, both sides danced a precarious ballet, on a floor littered with shreds of glass.”

The question is whether this can be repeated again.

Hezbollah appears to have attacked Israel on Sunday night, when four militants from an Assad regime-controlled area in Syria tried to plant bombs on the border with Israel, before being killed in an IAF strike.

If that attack was part of the ongoing covert war, it too underlines how the battle against the ostensible Iranian- Hezbollah weapons network has potential to escalate. Hezbollah may decide that it is not going to leave the score “unsettled” with a failed assault, and could try again soon.

Counter-balancing the potential for escalation is the fact that the Assad regime and its Shi’ite allies are facing battlefield defeats across Syria in recent days and weeks, and a second, open front with Israel is surely the last thing Hezbollah, Damascus or Tehran would seek. Yet in the current combustible regional reality, it is impossible to predict where event will lead.