You are here: Home / Senza categoria / The changing nature of the ISIS insurgency 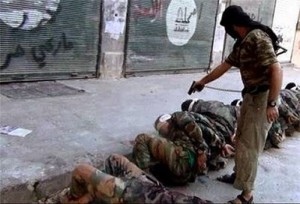 A string of attacks and counter-attacks over the course of this year so far signal a major shift in the way Islamic State of Iraq and Syria (ISIS) is conducting its military operations, leaning back on insurgency tactics it used when US troops were still present in Iraq. The change comes amid widespread perception in Western capitals that the group is now on the back foot. But it also follows a variety of crises – financial and political – that may cause deeper Western involvement in the Syrian and Iraqi conflicts.

Last Sunday, the group launched an assault inside the city of Abu Ghraib, 15 kilometres from Baghdad International Airport. More than 50 people were killed and the attack was repelled. In the process, the militants reportedly controlled the grain silo in Khan Dhari and took with them a dozen lorries full of badly needed grain into besieged Fallujah, which is around 30 kilometres away.

The following day, an ISIS suicide bomber attacked the funeral of an Iraqi member of Hashd Al Shaabi, a pro-government paramilitary organization, in the Iraqi city of Al Muqdadiyah, in Diyala. At least 27 people were killed, including prominent Hashd commanders. The attack follows similar ones in the same province in mid-January, when militants attacked a cafe and killed 40 people, causing sectarian reprisals that echo the sectarian violence in the same area after the civil war after 2005. On that day, ISIS also attacked a mall inside Baghdad, killing 18 people.

Those attacks in Shia-dominated areas happened despite heavy security measures taken by the government to prevent ISIS infiltration, including curfews and rigorous vetting of internally displaced persons.

Similarly, ISIS fighters swept through the northern Syrian city of Tal Abyad last Saturday in a clear hit-and-run blitz. Tal Abyad was seized by the Kurdish People’s Protection Units, known as the YPG, eight months ago. Despite the fact that ISIS operates many kilometres from the city, the militants controlled a number of key landmarks and clashed with the YPG for several hours before they withdrew under ‘devastating precision bombing’ by the US-led air forces, in the words of the special envoy Brett McGurk.

Policymakers in the West have long feared that the surge in such attacks would be a fallback strategy for the group when it is contained militarily. ISIS is compensating for its inability to conquer new areas, as it did before the air campaign started, by taking the fight to its enemies with devastating fatalities. It is a new challenge for which its local adversaries in Iraq and Syria do not seem to be prepared, including in the way they have been trained by international coalition forces.

Since the group’s large conquests in summer 2014, much of the training of security and fighting forces in the two countries has focused on conventional warfare, to improve the forces’ ability to repulse attacks by a group that often operated as a conventional army and to hold territory. The ISIS assaults in 2014 onwards differed from its previous mode of fighting as an insurgent group during the American military presence in Iraq, when training of Iraqi security forces largely focused on counter-insurgency. So the Iraqi army failed to adapt to the much more agile enemy.

Lately, training by Western countries has also accounted for the group’s versatile capabilities and sought to improve the adaptability of Iraqi security forces and Kurdish peshmerga. But training will have a limited effect on preventing ISIS from launching deadly attacks in well-defended cities and towns. The rate of such raids will probably increase in the coming weeks and months, especially as talk of offensives against the group in Mosul and Raqqa continues to come up.

Hit-and-run tactics are its way of diverting the attention of its enemies and causing steady damage in Iraq, Syria and beyond. Such raids are a huge challenge for the US-led coalition, as calls for urgent help come not from a front line but from random areas anywhere in Syria and Iraq.

As these attacks tend to be random, targeted and brief, more vigilance and concentration of forces will be required to minimize their effect, which means deeper US commitment in terms of air strikes and operatives on the ground will be needed. The fact that ISIS has taken a hit due to the air strikes does not necessarily mean that its enemies are better off. Both Baghdad and Erbil in Iraq suffer profound financial and political crises that could undermine the effort to fully defeat ISIS. Its enemies are also tired and, in some cases, their growing strength is producing new challenges that might lead to new conflicts, such as the rise of Iranian-backed militias in Iraq and the YPG in northeastern Syria. ISIS’s changing tactics add new challenges to the fight against it.

All those factors mean the US will undoubtedly get sucked further into Iraq and the Syrian conflict to shore up its allies and contain the threat of ISIS.