You are here: Home / MidEastGulf / The brutality of Islamic State is revealed as mass graves are excavated at Tikrit 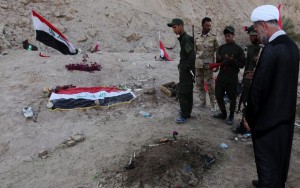 Three rounds of gunfire were shot into the air as a mark of respect to the dead. The small ceremony was held on a hill side over looking the Iraqi city of Tikrit. It was retaken from ISIL fighters last week . Iraqi forensic teams are now revealing what went on under the Islamist extremists’ rule.

Twelve mass graves thought to hold 1700 soldiers massacred last summer have been discovered and are being excavated.

Ali, a survivor told his story: “The fourth bullet was meant to kill me,” he said, “but I wasn’t hit. The fifth was fired killing the person next to me. Playing dead, I fell to the ground, I was covered in my colleagues’ blood and I rolled down into the valley.”

The mass killing last June of Shi’ite soldiers has become a symbol of ISIL’s brutality and their hatred for Iraq’s Shi’ite majority.

The victims’ families, some of whom are angry at Iraq’s political class for failing to provide them proper answers, have wondered for months about the fate of their loved ones.