You are here: Home / Europe / The Black Flag in the Balkans: the Islamic State has spread to Bosnia 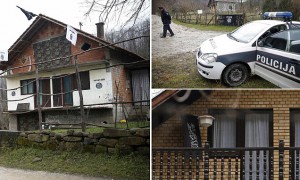 The Islamic State (IS) has settled into a small, unstable European country that has long played host to jihadists: Bosnia and Herzegovina.

The German magazine Der Spiegel recently reported that residents of some tiny, remote villages in the country’s mountainous north obey Sharia law and fly the militant group’s black flag. The villages serve as “safe houses” for radicals who have helped as many as 300 Bosnians join IS in Iraq and Syria — accounting for one of the highest proportions of jihadists from Europe, the magazine wrote.

The revelations are the latest chapter in Bosnia’s evolving relationship with terrorism.

After the breakup of communist Yugoslavia, Arab militants — many of whom fought with American support against the Soviet Union in Afghanistan in the 1980s — journeyed to Bosnia. There, they formed the “Mujahideen Battalion” to wage holy war against the Orthodox Christian Serbs and Catholic Croats fighting the Muslim Bosniaks, who comprise around 40 percent of the country’s population of 3.86 million.

“Bosnia has had this issue going on for a while,” Dan Byman, a senior fellow and counterterrorism expert at the Brookings Institution, told VICE News. “Way back when in early 1990s, for a little while, it was a cause célèbre for jihadists.”

Some of the mujahideen stayed. But other Bosnian extremists are natives. For decades, Saudi Arabia and other Persian Gulf countries have flooded Bosnia with funds for mosques and other Islamic institutions that helped consolidate communities following Riyadh’s radical brand of Wahhabi Islam.

The Bosnian government is trying to root them out. Late last year, Bosnian imam Husein “Bilal” Bosnic was sentenced to seven years in prison for recruiting for IS and inciting terrorism under a new law that toughened penalties for those crimes.

At the time, Bosnian authorities hailed Bosnic’s sentencing as a sign of their contribution to the war on terror. But Der Spiegel’s report, which described the area around Velika Kladusa near the Croatian border as a “hotspot for jihadist fighters,” suggests the authorities have work to do.

The lack of progress likely stems from Bosnia’s dysfunctional government.

The Dayton Accords that ended the Bosnian War in 1995 divvied the country up into a political hodgepodge — a presidency that rotates between a Bosniak, a Croat, and a Serb; the ethnically Serbian-controlled Republika Srpska; the Federation of Bosnia and Herzegovina that is further divided into 10 cantons; and the the autonomous Brcko District in the north. An entity created to monitor the Dayton Accords, the Office of the High Representative, as well as the United Nations help run the place, too.

Like in decentralized Belgium, where Flemish, Walloon and federal officials have struggled to unravel homegrown terror networks, the Bosnian political structure is bad for public safety. Bosnian federal police must notify Brcko District authorities before they can go to Gornja Maoca, one of the so-called “Sharia villages,” for example, Der Spiegel reported.

The political structure is bad for governance in general, too, experts said.

In 2014, Bosniaks rioted and set fire to government buildings to protest not only their leaders’ corruption and mismanagement, but their screwed up political system where nobody is responsible for getting things done. Today, unemployment stands at more than 40 percent, with youth suffering higher jobless rates.

“People are very frustrated with the quality of their leaders,” said University of Nebraska Political Scientists Patrice McMahon, who has worked extensively in Bosnia, in an interview with VICE News. “These clowns, these people who are in charge are super corrupt. They are not helping the people. The money is going into their pockets.”

Many of Bosnia’s problems are the same that bedevil other Balkan and Eastern European countries, like elites who learned politics under communism, she added.

“It’s some Bosnians themselves and people in the Balkans who see ethnic manipulation and corruption as the way to the future instead of jumping of the bandwagon of democracy,” McMahon said. “The only hope is for young people to get educated differently. People whom I would say are over 35 are maybe not corrupt, but I just don’t see them having the will to turn things around in Bosnia.”

The United States and Europe share the blame for the dysfunction, McMahon added. NATO helped end the Bosnian War after the Srebrenica massacres — when Bosnian Serb forces killed 8,000 Bosniaks — but the West hasn’t really helped Bosnia get on its own two feet. Sarajevo is a pleasant city, she said, but the billions of dollars’ worth of aid that’s poured into the country hasn’t resulted in positive systemic change.

“We promise so much. We deliver so little,” she said. “Sometimes I think we are doing more harm than good. They don’t really have a self-sustaining state.”

It makes sense that IS is exploiting the situation, she continued.

“After Bosnia, there was Afghanistan and Iraq. People were moving on and moving from nation building and wanted to say Bosnia was a success story,” she said. “Because of distractions, we’ve allowed this door to be opened, just like in Iraq.”