You are here: Home / MidEastGulf / The battle to retake Ramadi is going nowhere 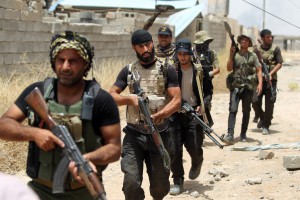 U.S.-backed Iraqi forces are struggling to make headway in their battle to retake the western city of Ramadi, highlighting shortcomings in Washington’s strategy to counter Islamic State militants.

Three months after the city’s fall to the Sunni extremist group, Iraqi forces have not yet surrounded the city 80 miles west of Baghdad, commanders say, the first stated aim of the counteroffensive.

The stuttering pace of the operation is likely to dent the image of the United States in Iraq, even as it spends $1.6 billion on training and equipping Iraqi forces.

The operation to retake Ramadi is being led by U.S.-backed forces, with Iraq’s Shiite militias largely excluded amid concerns about stoking sectarian tension in the Sunni majority province of Anbar.

The top Iraqi army officer for Anbar, of which Ramadi is the capital, blamed a lack of U.S.-led air support for the limited progress.

Prime Minister Haider al-Abadi said in an interview with the BBC in May that the city would be retaken “in days.”

“What is making it slow is that there are not enough airstrikes from the coalition to clear targets on the ground,” said Maj. Gen. Qasim al-Mohammadi, the head of Anbar Operations Command. “The coalition isn’t available all the time for Ramadi. They are busy (elsewhere in Iraq) and in Syria, so there’s a lack of strikes.”

A U.S. military official, speaking on the condition of anonymity to discuss an Iraqi-led operation, said the effort to expel Islamic State fighters from Ramadi had been slowed by a number of factors, including severe heat in recent weeks and the extensive fortifications and booby-traps that militants have laid across the city.

As for air support, Marine Brig. Gen. Kevin Killea said U.S. forces were providing the Iraqis with “what they need.”

“I have visuals on how much air support we’ve been given on a daily basis. . . . Just in the last week alone, we’ve done 16 or 17 strikes in the Ramadi area alone,” he said.

The United States is spending $9.9 million a day on its air campaign in Iraq and Syria, and coalition planes have carried out about 4,000 airstrikes in Iraq over the past year.

But Iraqi officials say that is not enough to make a decisive difference on the ground.

“We’ve asked them for more strikes more than a thousand times,” Mohammadi said. “They say there’s a lack in the number of aircraft and multiple front lines.”

Mohammadi spoke by phone from the northern city of Irbil, where he was recovering after being injured in a mortar attack last month. Days later, two senior Iraqi generals were killed in a suicide bombing. Still, Mohammadi remained upbeat.

“We don’t think these losses among the leaders are going to affect morale,” he said. “We are still holding, and the offensive is ongoing.”

Other commanders were less optimistic.

“The forces moved forward about a month and a half ago, and then nothing,” said a general with the Iraqi security forces. Like other commanders, he spoke on the condition of anonymity to discuss the failings of the operation. “There is no plan, and there is no leadership.”

He disagreed with the Anbar army chief’s assessment that a lack of U.S. strikes was to blame.

“The coalition is there, and if there was a battle, they’d assist, but there’s no operation for them to assist with,” he said.

Another senior army officer based in the province said that there is “no clear picture” for any assault on Ramadi or Fallujah, a city about 35 miles to its east that is also held by the Islamic State. Militants are still able to move between the two cities, he said.

“There’s still a road between Ramadi and Fallujah,” he said. “It’s very narrow, but we haven’t cut it a hundred percent.”

The officer described “fields” of improvised explosive devices, which have slowed progress. Overall, Islamic State militants have the upper hand on the battlefield, he said, launching regular attacks on Khalidiyah and Habbaniyah, towns about 15 miles east of Ramadi near Taqaddum air base, where U.S. soldiers are now based.

Officials hoped that the deployment of 450 additional U.S. troops to the base in June would give the United States a more direct role in advising Iraqi troops and better oversight over the arming and training of Sunni tribal fighters, who are seen as essential to the operation.

Many of the Sunnis were hired to be part of the local police, but that force is near collapse as senior officers desert amid infighting. New formations of Sunni fighters have not been formalized.

Col. Hamid Shandoukh, a police officer who fought in Ramadi until the city fell, said police salaries have been cut and senior officers have been sidelined in what he called a “sectarian” policy of the current police chief.

Like most of the remaining Ramadi police officers, he left the force a month ago, he said. He hopes to lead a regiment of tribal fighters, but a law that will formalize them as a “National Guard” has not been presented to parliament amid fierce opposition.

“They can never liberate Ramadi without the locals,” said Lt. Col. Issa Alwani, another police officer who is leaving the force.

Some tribal fighters are already mobilized around defense lines in the province.

“Right now, Daesh has the upper hand,” he said, using the Arabic acronym for the Islamic State. “They say that Ramadi is besieged, but Daesh is attacking Khalidiyah from Ramadi, so how can it be besieged?”

While U.S.-backed forces have slowed around Ramadi, the volunteer forces and Shiite militias that have surrounded Fallujah have also stalled on the city’s outskirts.

“There is movement, but it’s really slow because of civilians still there, and the area is rigged with bombs,” said Ahmed al-Assadi, a member of parliament and spokesman for the volunteer forces. “We are moving according to the plan. It will take a very long time, and the clashes will remain.”

However, some commanders doubted that an assault on the city could be launched at all, given the current makeup of ground forces.

“It’s possible, but with the current situation, the current plan, it’s not,” said the general with the Iraqi security forces. “Whatever the case, it’s going to take a long, long time.”