You are here: Home / Mediterranean / The battle for Libya’s oil crescent 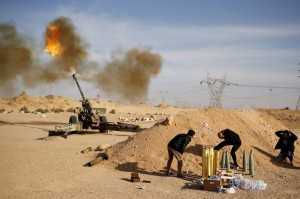 On September 11, forces of Field Marshal Khalifa Haftar’s Libyan National Army (LNA) seized four major oil ports from a rival militia, the Petroleum Facilities Guards (PFG), which had pledged loyalty to Libya’s fledgling Government of National Accord (GNA). In doing so, Haftar has further undermined the credibility and legitimacy of the GNA, which has struggled to expand its powerbase beyond Tripoli and Misrata. Libya is deeply divided between the UN-backed GNA, and the Tobruk-based House of Representatives (HoR), for which Haftar’s LNA is the prime military force. Haftar and the HoR have consistently denied the GNA’s legitimacy and acted to undermine its authority at every opportunity. The PFG’s leader, Ibrahim Jathran, had dominated a large portion of the country’s oil since 2013. Jathran had repeatedly blocked oil exports from the ports under his control in an attempt to extort payments from Libya’s respective governments. While many Libyans applauded the liberation of their country’s main source of national wealth from the PFG, the GNA and its international backers initially condemned the move.

Oil accounts for approximately 95 percent of Libya’s government revenue. The LNA’s victory puts Haftar and the HoR in control of most of the country’s oil, bolstering their negotiating position vis-a-vis the GNA. That Haftar was able to swiftly seize the oil terminals and quickly resume exports is a testament to both his military power and political pragmatism. Recognizing that Haftar is a force to be reckoned with, GNA Prime Minister Fayez al-Sarraj recently suggested that Haftar could play a prominent role in a future unity government, although Haftar has often balked at the prospect of power sharing.

In the short term, it is unlikely that Haftar and the HoR will be able to use their control over the oil ports to sideline the GNA. Hoping to prevent militias from exploiting the country’s oil resources, in 2014 the UN Security Council banned the sale of Libya’s oil through non-government channels. Thus, attempting to circumvent the GNA and sell oil illicitly would require collusion with international buyers that are willing to violate the UN resolution. Previous attempts by both the PFG and the HoR to independently sell oil proved futile.

Unable to exploit the oil at the GNA’s expense, the HoR has agreed to allow exports from the ports under the auspices of the country’s National Oil Corporation (NOC). Under the new arrangement, the oil revenues will go to Libya’s Central Bank—which is under the control of the GNA—putting the country’s rival governments in a de facto economic power-sharing arrangement. According to Bloomberg Markets, Libyan oil exports have already jumped by 70 percent compared to August. The increase prompted a swift about face from both the GNA and its Western backers who view oil revenues as essential for the country’s fight against terrorism and have long tried to bring Libya’s exports up to full capacity.

For years Libya has been exporting oil at a fraction of its capacity, due mostly to damaged oil infrastructure and export blockades by extortionist militias. The NOC now hopes to increase its exports from around 260,000 barrels per day in August to 900,000 barrels per day. The expected increase in exports comes as OPEC members agreed this week to a production cap meant to prop up the price of oil. However, Libya’s exemption from the agreement means that its increased exports will continue to put downward pressure on oil prices. Given the difficulty that Haftar and the HoR would face in selling the oil on their own, the appeal of the current arrangement is likely to keep Libya’s oil flowing, at least in the short term. Nonetheless, Haftar is now in a position to leverage his disproportionate control over the country’s oil to increase his power at the expense of his rivals, and Libya’s recent history suggests that it is only a matter of time before he does so.