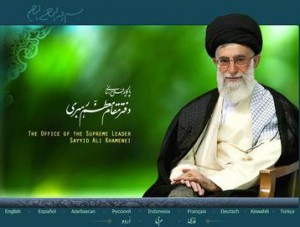 The New York Times recently reported that Iranian Ayatollah Ali Khamanei has cautioned that the nuclear agreement needs “careful scrutiny.” That warning was posted on his website, “The Office of the Supreme Leader, Sayyid Ali Khamenei,” www.leader.ir

Website?? Really. I have always thought of Iran’s supreme leader, and all the other Ayatollahs, as reclusive Luddites who still use quill pens and goat skins or parchment for spewing their hatred. I never imagined that they are embracing social media to get out their message of Death to America and their determined campaign to wipe Israel off the face of the globe.

Upon further inquiry, I discovered there are at least 30 Ayatollahs who have active websites (they are listed on a Princeton University website). All of them are professionally constructed and quite user friendly (including easy access to English, Russian, and German translations, among other languages), with icons for FAQ’s such as, if a fasting person belches and swallows intentionally that which comes into his mouth, his fast becomes null and void, and, no, it’s not permissible for men to wear white or gold, or earrings for that matter.

Other features featured on the Ayatollahs’ websites include “Ayatollah in the Media,” a listing of newspaper, magazine, and television mentions of the Supreme Leaders’ activities and lofty pontifications. There are also handy links to books, Islam laws, Hajj rituals, and affiliated websites. Far from spurning modern technology, the Ayatollahs have fully embraced it and are exploiting it in every way to deliver their message around the world.

One can only wonder whether His Eminence Khamanei is a Facebook regular who posts photos from festivals and rallies he organizes to chant “Death to America” and other anti-Western invective. And, who knows, maybe he has a Twitter account and regularly tweets to other Islamic leaders all the words to the latest hate-mongering chants.

So, it seems the Iranian leaders’ rejection of all things “Western” and particularly “all things American” is very selective and doesn’t include the vast technological offerings from Microsoft, Apple, and other purveyors of cyber-ware. The denunciation of things “Western” is limited to fashion, music, art, literature, and movies rated X, R, and probably even PG. The purity of their convictions is tainted by notable cyber exceptions.

Wonder if Ayatollah Ali Khamanei has every visited the popular websites, “Hot Babes of Iran” or “Tahmineh Does Tehran”?