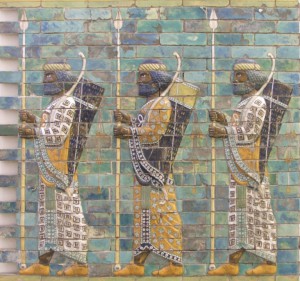 The Islamic State makes millions of dollars selling looted artifacts on the black market. A few years ago, the world watched in horror as Daesh uploaded videos of its followers destroying antiquities in the name of its ultra-puritanical ideology.

The militants have since wised up. Daesh realized it could both rid itself of the influence of pre-Islamic culture and fund its caliphate at the same time. Black market trade in archaeological artifacts has become quite the industry for the terror group.

According to the documents, Daesh’s Antiquities Division levies a 20 percent tax on all looted ancient merchandise and even issues permits to preferred excavators.

This isn’t some half-assed, fly by night operation. Islamic State has turned looting into an industry complete with permits and receipts.

But world governments, museums and even the art community are fighting back. The art world has done a lot to regulate itself to stop the spread of the stolen antiquities into private hands.

Cultural looting is a two-pronged problem. The Islamic State is destroying anything that offends it and profiting from the destruction. The problem is both moral and practical.

It’s easy to dismiss the destruction of a country’s heritage while religious fanatics burnpeople alive in cages. But this isn’t to suggest there is no value in keeping the funerary bust of a long forgotten king out of the glass case of a European collector.

“This is a shared responsibility,” France Desmarais of the International Council of Museums told me via email. “For the same reason one should not buy blood diamonds or trafficked natural species.”

“Looting causes damages to countries, harms cultural heritage and hurts populations that suffer from this criminal activity. It is not as inoffensive as one might think collecting can be.”

For one, cultural property is emblematic of a culture’s identity — and has important social, political and historical value. “We have to protect this heritage because it is our common heritage and history,” Desmarais added.

There’s also the practical side. The Islamic State and other groups fuel their war efforts with these stolen artifacts. “Sales receipts indicated the terrorist group had earned more than $265,000 in taxes on the sale of antiquities over a four-month period in late 2014 and early 2015,” the GAO stated.

It’s hard to tell just how much money the group makes from selling cultural artifacts, but “State officials also noted that although trafficking is difficult to quantify, ISIS has increasingly turned to the antiquities trade as access to revenue from other sources, such as oil, has been restricted.”

The tactic is also devastating the landscape.

The international art market is harder to regulate than other industries. By its nature, it’s built on personal relationships, discretion and academic knowledge. Yet those experts are comparing notes, building relationships and shutting down the illegal trade where they can.

ICOM is one of the leaders in the effort, and its Red Lists are simple and powerful tools in the fight against Daesh’s antiquities trade. ICOM’s lists are pamphlets detailing objects most at risk for theft from a given area.

“The very first concerned African archaeological objects, to help alleviate the illicit traffic in cultural goods from West Africa. Since then, 14 more have been issued,” Desmarais explained.

She insisted that the Red Lists are effective, pointing to British custom officials at Heathrow Airport who collected 3.4 tons of stolen artifacts between 2007 and 2009 using ICOM’s Afghanistan Red List.

The Red Lists are in line with what the GAO identified as five different activities that governments and museums can take to help prevent the Islamic State from selling off stolen antiquities: information sharing, awareness raising, destruction prevention, law enforcement and overseas capacity building.

ICOM is at the forefront of these suggestions. The council been building relationships, raising awareness and sharing information for more than 15 years. Besides its Red Lists, the group maintains a code of ethics for museums and buyers that helps them navigate the increasingly bizarre and dangerous artifact market.

“Civil society has to be informed and be given guidelines as to their behavior as potential buyers,” Desmarais told me. “The art market, along with personal buyers have to be aware that a cultural property might have been illegally exported from its country of origin.”

The GAO and the experts it talked to came up with new ideas to help prevent Daesh and others from profiting off purloined artifacts. The biggest and best is an advanced version of ICOM’s Red List, where government agencies and museums team up to create a centralized database of at-risk artifacts.

The U.S. government has responded to this suggestion in a broad and general way — as government agencies tend to do. “State officials noted that State provides funding to support several projects annually to inventory museum and archaeological sites,” the GAO explained. “Including in countries where cultural property may be at risk.”

ICOM and others aren’t waiting around. It may not be a fancy centralized database, but ICOM is working on new Red Lists. “Two new [lists] are now in preparation, a Red List of West African Cultural Objects at Risk (with an Emergency section for Mali) and an Emergency Red List for Yemen,” Desmarais said.

Desmarais is under no illusions. This will be a struggle for years to come, and she worries about the ongoing looting in Syria and Libya. I asked her what she thought was the most at risk and she demurred before answering.

“Without creating a hierarchy of the importance of objects, we can say that some categories are unique and can only be found in one place; that is the case for certain types of funerary busts from Palmyra (Syria) and Cyrenaica (Libya) for example.”

“We know those are much in demand from collectors and, coming from an area in conflict or having been under occupation, they are very much at risk.”