You are here: Home / Senza categoria / The art of Islamist anti-terrorism measures after Barcelona 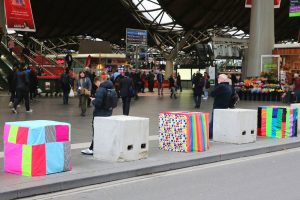 Have you ever wondered why so much public art placed in front of office buildings seems to takes the form of huge blocks of concrete and metal? This isn’t simple aesthetics, the favoured style of banking CEOs. These sculptures are often part of the anti-terror infrastructure that make up the modern city’s vernacular, semi-disguised variations on the bleak concrete blocks and metal barriers that protect buildings and pavements all over the world. At their most basic, these blocks and barriers draw attention to the vulnerability of the very people they are designed to protect, which is why artists, planners and architects increasingly seek ways to subvert or transform them, like reported by apollo-magazine.com.

Recently Florence’s mayor, Dario Nardella, held a workshop with architects to discuss alternative forms of protective ‘anti-hostile’ street furniture. ‘We must not give in to the blackmail of terrorists and let our city be turned into military bunkers,’ said Nardella. ‘We need more security without sacrificing the beauty and identity of our cities. Our response to the hatred of terrorism is in art and beauty. We do not want to transform our squares into [sites of] anxiety and barred areas of barriers and blocks of cement.’

Italian architect and planner Stefano Boeri’s solution, enthusiastically adopted by Nardella, is to use trees, planters, benches and bike racks as anti-vehicle barriers that would protect buildings and pedestrians but also enhance the experience of city-dwellers by providing useful infrastructure. The idea is that rather than repel, they would encourage people to use their city in different ways. ‘We mustn’t give a small group of killers the satisfaction of having annihilated the beauty, social and cultural vitality of thousands and thousands of European markets,’ Boeri said. ‘The purpose of these attacks is to intimidate us, to lock us into our private homes, to turn people away from Europe’s beautiful public squares and spaces.’

Nardella has talked to other city mayors in the hope that Boeri’s ideas will replace the mono-functional barriers already installed all over Europe. Many new developments now build subtler anti-terror features into their designs from the start. Football fans visiting Arsenal’s Emirates stadium might not realise it, but the area around the ground was designed to keep traffic away from the stadium – originally, so that terrorists couldn’t ram a car filled with explosive into the stands. The huge letters spelling out ARSENAL are a photo opportunity that would stop a truck, while the forecourt is sprinkled with concrete benches and seemingly decorative cannons that act as obstacles for cars. The use of such street furniture in new developments is now ubiquitous – think how difficult it would be to approach the GLA building at More London by car, with all its narrow entrances, water features, benches and moats – as architects look to find easy-on-the-eye solutions rather than have more cumbersome and oppressive security features imposed after the build.

When that isn’t possible, architects and artists have – like Boeri – tried to soften newly installed barriers. This began in New York after 9/11 when bollards were installed to protect Wall Street. Originally these were plain metal barriers and grey concrete planters, but they were later replaced by sculpted bronze designs by Rogers Partners Architects+Urban Designers. Elsewhere, the group erected rotating bollards with LED lights to lighten their appearance. Such innovations with bollards are now increasingly populararound the world.

Where more functional concrete bollards and barriers have been hastily installed in the wake of a terror attack, artists have tried to subvert or transform their appearance – sometimes under commission, sometimes uninvited. One of the first cases was Jerusalem, where in 2014 street artists began decorating grey blocks that had been installed to prevent hit-and-run attacks, turning them into canvases. One was turned into a Rubik’s Cube, others adorned with flowers. Before Christmas in 2016, three blocks in Milan were adorned with attractive scenes – reindeers, birds, and flowers in soft, abstract watercolours.

The artist Ellie Miles used vibrant blocks of colour when she was asked to liven up barriers erected along the Royal Mile in Edinburgh to protect festival-goers this August, while David Gray in Melbourne caused a stir when he suggested the five panels of the city’s new concrete defence blocks could act as ‘a fantastic art space… which artists could just cover with amazing temporary stuff.’ Shortly after, artists began shrouding the blocks in gorgeous, multi-coloured hand-sewn fabric, while others glued on handfuls of sequins. The City of Melbourne promised not to remove the covers, giving it tacit official approval and also underlining the apolitical nature of the enterprise.

The bollards had been erected after six people were killed on Melbourne’s Bourke Street in an incident police believe was not terror-related, and artist David Gray emphasised that the use of art shouldn’t detract from the crime or the victims. The results are undeniably attractive, even if there remains something slightly jarring about the use of bright, primary colours and chintzy abstract images to decorate blocks designed to protect pedestrians from brutal bloody murder. Similarly, more than 70 steel bollards around London Bridge station have been sympathetically painted by French artist Jennifer Abessira. She was commissioned by Team London Bridge to dampen the drama of the furniture, thus finding a way to incorporate the hard reality of anti-terror infrastructure with the soft-focus placemaking beloved by contemporary developers, who see everything as an opportunity to further the corporate message. Expect much more of this in the future.