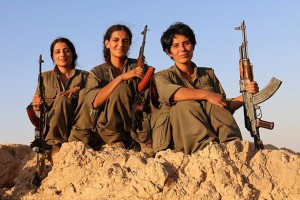 Three female fighters are waging their own person campaign against ISIS – and have been killing up to 10 militant a day.

Raparin, Roza and Deijly left their lives in Turkey to help stem the genocide being committed against the Yazidi people in Mount Sinjar, northern Iraq.

“When we heard ISIS were coming to Sinjar and killing women, we came to stop the humanitarian crisis,” Roza, 22, told MailOnline.

The bloodshed against the Yazidis started last year when ISIS raided their homes and villages.

The Yazidis are a religious minority in Syria and Iraq and are oppressed and terrorised by the terror group – a total of 5,270 Yazidis were abducted last year, and more than 3,000 are still in their grip, according to figures within the community.

ISIS claim that rape is part of their twisted interpretation of Islam, according to the testimony of children they have abducted and forced into sexual slavery.

“They did this first of all to get rid of the Yazidis and convert them and second, to do bad things to their females,” Roza added.

The three women smuggled themselves into Iraq before joining the frontline against murderous ISIS militants.

“We were sometimes killing ten of them a day, in the beginning of the liberation of Sinjar,” said Raparin.

Aided by American air strikes, the female fighters have helped clear a corridor for Yazidis to flee.

It is feared thousands of people have left Europe to join ISIS in recent years.

They include a number of British citizens.

Aqsa Mahmood, 21, fled Glasgow to become a jihadi bride in Syria and frequently takes to social media to tell other women about her life.

Omar Hussain, 27, left his life as a supermarket worker in High Wycombe, Buckinghamshire, to join the murderous cult.