You are here: Home / Africa / The al-Qaida peril in Africa 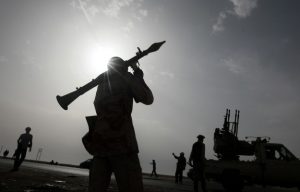 Al-Qaida poses a more serious long-term threat to Africa’s Sahel region than the Islamic State militant group, despite the exodus of Islamic State fighters fleeing the Middle East, the U.S. military’s special operations commander in Africa said in an interview.

Speaking on the sidelines of the annual U.S. counterterror exercise to train West African special forces, Maj. Gen. Marcus Hicks pointed to last month’s deadly attack on the army headquarters and heavily guarded French Embassy in Burkina Faso that was claimed by an al-Qaida-linked group in neighboring Mali.

It was the first evidence of a transition away from attacks on “soft” targets such as hotels, he said Thursday, and further proof that West Africa’s multiple extremist groups continue to push into new areas of the Sahel.

Although nearly 1,000 members of U.S. special forces are in Africa and a new G-5 Sahel multinational force is taking aim at fighters with shifting alliances to the Islamic State and al-Qaida, reversing the worsening security situation “will be frustratingly, unsatisfyingly slow,” Hicks said.

“I believe al-Qaida has a more disciplined approach to developing infrastructure across Africa, north Africa, the Sahel,” he said. “They are taking a patient approach to gaining ground in influence over organizations that are already there and co-opting local and regional grievances and turning it to their own devices.”

At the same time, “we are mindful of, very concerned about, the possibility of returned foreign fighters coming out of the Middle East” as the Islamic State collapses, he said.

No one knows how many Islamic State fighters may have returned to West Africa. The current threat largely comes from local fighters who have declared their allegiance.

This year’s U.S.-led Flintlock counterterror exercise takes place in Niger, where the killing of four U.S. soldiers and several Nigeriens in an extremist ambush in October raised questions in Washington about the U.S. military’s operations in Africa.

A U.S. investigation into the ambush, which was claimed by fighters linked to the Islamic State group, has not yet been released.

“We’d not seen any major incursion like this down into Niger before October,” Hicks said.

The U.S. is now shifting more of its efforts away from training, advising and assisting tactical formations with local partners in the Sahel and into a similar role “farther up the chain of command at the battalion level,” Hicks said. He said the change began before the Niger ambush.

“Where it makes sense, we still accompany those tactical formations,” he said, but he called supporting a “battalion-sized maneuver” more effective.

“We’re not reducing our footprint or tempo,” he added. U.S. special forces intentionally have a “light footprint” in a region where countries may not want to have more, he added, calling the approach sustainable and affordable.

The threats include al-Qaida-linked fighters in Mali and Burkina Faso, Islamic State-affiliated fighters in Niger, Mali and Nigeria and the Nigeria-based Boko Haram. They take advantage of the vast region’s widespread poverty and countries’ often poorly equipped security forces.

The extremist threat has been marching south in the Sahel at an unprecedented level, Hicks said.

“The threats are very real here and, if anything, October should remind us that these groups are very capable and very dangerous,” he said.

The U.S. special operations’ shifting approach is meant to be more effective in supporting the recently created G-5 Sahel Force that aims to have 5,000 troops from Mali, Niger, Burkina Faso, Mauritania and Chad countering extremist groups in the region.

The approach is similar to that of the Multinational Joint Task Force that has been fighting Boko Haram’s insurgency in the Lake Chad region farther east.

Although the U.S. counterterror effort in remote areas of Africa plays out far from home, it’s worth it, he said.

“This is a very, very high return on investment activity,” Hicks said. “If we fail to take this opportunity to deal with these threats here, then we have to deal with them somewhere else.”