You are here: Home / Analysis / The age-old Sunni-Shi’ite conflict: will the new US administration be a game-changer? 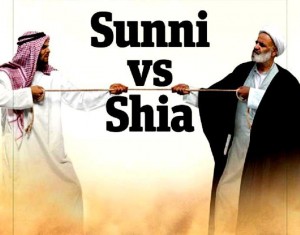 Sunnis make up 85% of the Muslim world, with Shi’ite a poor second at less than 15%. Nevertheless, Iran enjoys an advantage because it is the supreme Shi’ite religious and political authority, whereas in the Sunni world, every imam can issue his own fatwas – though there is no general obligation to follow them.

Even Al-Azhar University, with its long history and immense prestige, cannot enforce its edicts. A case in point is the inability of Sunni nations to agree on the beginning of the fast of Ramadan.

Furthermore, except Saudi Arabia and Qatar, Sunni states have secular institutions based on a constitution, elections, a parliament and separation of powers, though the Shari’a remains the main source of legislation.

While religious extremism Shi’ite and Sunni appear poised to tear apart the Mideast, the lack of religious solidarity – let alone a common policy – severely hampers the ability of Sunni countries to counter the Iranian threat.

Beginning with Khomeini, Tehran has developed a powerful and aggressive army to push its agenda: exporting its Islamic Revolution to Sunni states as a first step before attacking “the great Satan” – the US and its allies.

It is doing its best to minimize its direct interventions and focuses on the organizations it has set up: Hezbollah, Ansar Allah (Yemenite Shi’ites better known as Houthis), the Badr movement and a score of militias made up of veterans from Afghanistan and Iraq presented as “popular volunteers” to disguise their terrorist nature.

They are all trained, equipped, financed and directed by Tehran, as Hassan Nasrallah openly admitted a few months ago. The driving force behind them is Maj.-Gen. Qassem Soleimani, head of the al-Quds Brigade of the Revolutionary Guards, who is usually hard at work training his men in Iraq and Syria.

Iran was a major driving force in the disintegration of Iraq, Syria, Yemen and the shambles that is Lebanon.

At some point, the Pentagon tried to work with Iran against al-Qaida in Iraq, but Tehran was not interested – a n unstable Iraq was suited to its goal of strengthening its hold on the country through the Shi’ite government set up by America.

In Syria, Iran helped Bashar Assad in the first critical months of the popular uprising, while Washington did not seize the historic opportunity to back Sunni opposition, help bring down Assad and separate Syria from Iran. Then, in 2013, Tehran had Hezbollah side with Assad to avoid prevent his downfall.

In Yemen, the Houthi rebellion, wholly financed by Iran, aims to take over the country and also to increase the threats on Saudi Arabia and control access to the Red Sea.

In 2008, an attempt by a Hezbollah sleeper cell to sabotage the Suez Canal and destabilize Egypt was discovered in time and the terrorists jailed.

Later, Iran applied caution in its dealings with Cairo and is attempting rapprochement.

Regarding Turkey, the ayatollahs are moving prudently and a dialogue of a sort is ongoing. Recep Tayyip Erdogan believes they won’t dare attack him as Tehran bides its time, convinced that the fall of Sunni regimes in the region will leave Turkey isolated.

Meanwhile, the Iranians are ignoring the spirit of the nuclear deal they signed and continue to build long-range missiles to implement the vision of Khomeini and await the expiration of the agreement to continue developing their nuclear potential.

Sunni countries are aware of what is happening but cannot abandon their narrow interests to form a front against Iran and against Daesh.

Though Kurds had been at the fore of the battle against ISIS, Turkey is more interested in fighting them to prevent the creation of a Kurdish autonomy on its border.

Therefore, Ankara is turning a blind eye to Iran’s meddling in Syria. For a long time, it did nothing to stop ISIS, in the mistaken belief that it would chip away at the Kurds. It now understands that Islamic State is also a threat to Turkey.

Egypt, bereft of American support, has turned for help to Russia – which is in a de facto alliance with Iran to support Assad – and, therefore, is not doing anything.

To round out the picture, Egypt and Turkey are no longer on speaking terms since Ankara is seething about the ouster of president Mohamed Morsi and the regime of the Muslim Brotherhood.

Saudi Arabia bears the brunt of the Iranian threat, because of its proximity, and its importance to the Sunni world as the keeper of the holy cities.

It is helping the rebels in Syria while trying to keep an open dialogue with Egypt and Turkey, but as long as these two remain at loggerheads there can be no common front against Iran.

In the not so distant past, Egypt and Saudi Arabia had jointly led such a front that included the Gulf states, Jordan and even Morocco. Israel was helping behind the scenes with great hopes of stopping Tehran’s nuclear ambitions, by force if necessary.

The US was the glue that kept them together until Obama made a deal with Iran.

Today, the Sunni world is hopelessly divided, and not only in the Middle East.

Morocco and Algiers are bickering about the fate of Western Sahara; Libya is in the throes of multi-faced civil war; and radical terrorist organizations from al-Qaida to Daesh are bent on forcing their brand of Sunni caliphate on Sunni countries and are further destabilizing the region.

What next? Maybe the new American administration will be a game changer. Maybe it will see at last that the situation constitutes a growing threat to the West.

A renewed humanitarian crisis would have millions of refugees seeking safety and hope in Europe and the US. Islamic terrorism is hitting again and again at soft civilian targets. Weapons of mass destruction could be thrown into the volatile mix.

Russia is not immune. Its southern border is perilously close to conflict zones, and there are significant Muslim minorities on its soil.

Together, Washington and Moscow could do what neither can do on its own: douse the flames and bring a measure of appeasement. But, for that, they would have to eradicate Daesh together and find a way to cut Iran off from Syria, its gateway into the Middle East.