You are here: Home / MidEastGulf / The 4 battlegrounds Iran uses to threaten Israel and the Middle East 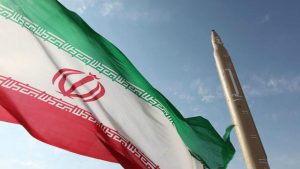 Iran and Saudi Arabia have been locked in a proxy war for almost 40 years, competing for regional supremacy from Iraq to Syria and Lebanon to Yemen, like reported by haaretz.com.

French President Emmanuel Macron offered a proposal last week at the White House to both save the Iran nuclear deal and address Trump’s issues with the deal. Under Macron’s proposal, the United States and Europe would agree to block any Iranian nuclear activity until 2025 and beyond, address Iran’s ballistic missile program and generate conditions for a political solution to contain Iran in Yemen, Syria, Iraq and Lebanon.

Saudi Arabia and Iran are locked in battle for regional control as the Sunni majority Saudis try to expand influence to match and overtake the Shi’ite majority Iranians. Saudi Arabia has vowed to pursue nuclear weapons in the event the Iranians restart their nuclear program.

Israel and the U.S. fear Iran could fall back on its regional militant allies or proxies to retaliate against alleged air strikes on Iranian targets in Syria, a strategy Iran has used with great success since its ruinous 1980s war with Iraq.

Iran’s greatest proxy achievement is Hezbollah, the Lebanese militant group and political organization that pushed occupying Israeli forces out of Lebanon in 2000. Since then, Hezbollah has remained an adversary of Israel and fought one war against it in 2006. Southern Lebanon’s rolling hills bordering Israel remain Hezbollah’s stronghold.

Iran could retaliate through Hezbollah, but the group has been battered in the Syrian war. Supporting embattled Syrian President Bashar Assad has seen hundreds of its fighters killed and wounded.

Hezbollah also wants to further integrate into local Lebanese politics as the nation votes on Sunday for a new parliament for the first time in nine years. Launching a new war could endanger its political support base, including possibly among its Shi’ite constituency, which is wary of another ruinous war with Israel.

After the surprise and temporary resignation of Lebanese prime minister Saad al-Hariri in November 2017, Saudi Foreign Minister Adel Jubeir said Hezbollah had been “calling the shots” in the Hariri government, which included two Hezbollah ministers and was formed last year in a political deal that made Michel Aoun, a Hezbollah ally, head of state.

Hezbollah and its allies will struggle to form a government without Hariri or his blessing, leaving Lebanon in a protracted crisis that could eventually stir Sunni-Shi’ite tensions, though there is no sign of this yet as all sides urge calm.

Announcing his resignation, Hariri cited an assassination plot against him and slammed Iran and Hezbollah for sowing strife and trying to “kidnap” Lebanon away from the Arab world. The declaration came as a surprise even to Hariri’s aides.

It is not clear what comes next: Saudi-backed efforts to weaken Hezbollah in Lebanon failed badly a decade ago, ending with a bout of Sunni-Shi’ite fighting on the streets of Beirut that only underlined Hezbollah’s military dominance.

Iraq is unique in the Middle East as it is both a U.S. ally and an Iranian ally. In Iraq, Tehran-backed militias and Iranian commanders have often seemed as powerful as the U.S.-backed Iraqi military, most recently in an operation to retake Kirkuk from Kurdish forces.

So emboldened was Iran that top Iranian official Ali Akbar Velayati trumpeted his regional alliance’s success from Beirut early November 2017, declaring victories in Iraq, Syria and Lebanon. His statement to the media after a meeting with Lebanon’s Hariri was seen as a major provocation to regional Sunni powerhouse Saudi Arabia.

Iraq votes in a May 12 election, which could complicate and delay the formation of a government, threaten gains against Islamic State and let Iran meddle further in Iraq’s politics.

About 60 percent of Iraqis are 27 or younger and many young people in urban areas say they want a secular government, underscoring the split within the Shi’ite voter base.

Since at least 2012, Iran has provided vital support for Syria’s military. Tehran says its goal is battling extremist Sunni militancy. Its critics say it seeks to cement regional power extending through Iraq, Syria, and Lebanon.

Qassem Soleimani, the head of Iran’s elite Quds Force – an overseas arm of the IRGC – has appeared on frontlines across Syria, and coordinated with Moscow over its deployment in Syria in 2015. Iran says its forces are in Syria in an advisory role.

More than 1,000 Iranians have been killed in the war, including senior members of the Guards.

Iran-backed Shi’ite militias have come to Syria from around the region including from Iraq, Afghanistan and Pakistan, to fight on the side of government forces. They have often been led in battle by Hezbollah.

Earlier this month, Saudi Foreign Minister Adel al-Jubeir said Saudi Arabia would be prepared to send troops into Syria under the U.S.-led coalition if a decision is taken to widen it.

Asked about Saudi troops on the ground in Syria, U.S. Secretary of State Mike Pompeo said: “We will sit down and talk about… how to best make sure that this is not America alone working on this, it’s the Gulf states working alongside us.”

Yemen’s armed Iranian-aligned Houthi movement, which took out the Saudi-backed government in Yemen in March of 2015 and now controls northern Yemen, has fired over 100 missiles into Saudi Arabia, the latest salvo killing a man on Saturday in the southern Saudi province of Jizan. Those missiles have targeted the Saudi capital and key oil production facilities near Yemen – as well as Saudi oil tankers.

The United States and the Saudi-led coalition that intervened in Yemen’s civil war in 2015 accuse Iran of providing the missiles to its Houthi allies, which Tehran denies.

The war in the Arabian Peninsula’s poorest country, which pits a coalition of Sunni Arab states friendly to the West against a Shi’ite armed movement sympathetic to Iran, has unleashed one of the world’s worst humanitarian crises.

The Houthis control the north of Yemen, including the capital Sanaa. Saudi Arabia and its allies have been fighting on behalf of an exiled government with a foothold in the south.

The Saudi-led coalition has launched thousands of air strikes on Yemen in the past three years, some of which have hit hospitals, schools and markets, killing hundreds of civilians while bringing Riyadh little closer to military victory.

The kingdom has said hundreds of its own soldiers and civilians have been killed in Houthi mortar and short-range missile attacks across their rugged southern border.

The United Nations says 10,000 people have died in the conflict so far, and millions face potential famine and disease because of disruption to food and medical supplies.

Around 22 million civilians, or 75 percent of Yemen’s population, require humanitarian aid, according to latest U.N. data. The conflict has caused the worst cholera outbreak in modern history, with over 1 million reported cases.