You are here: Home / MidEastGulf / Thanks Erdogan! Hundreds of Daesh supporters flee as Turkey hits Kurds 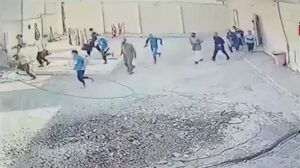 Hundreds of Daesh supporters have escaped a camp in northern Syria as Turkish forces battle to take a Kurdish-held border town, like reported by metro.news.

Is is believed up to 950 people absconded from Ain Issa, which had a population of around 12,000 — including 1,000 wives and widows of Daesh fighters and their children.

They are said to have escaped after attacking guards and storming the gates while clashes took place between Syrian fighters backed by Turkey and Kurdish forces.

Jelal Ayaf, an official at the camp 20 miles south of the border, said 859 people escaped from the section housing foreigners and described the situation as ‘very volatile’.

A few were recaptured but supporters inside the other section of the camp also escaped and were carrying out attacks, he added.

Five Daesh prisoners were able to escape during a mortar strike outside Qamishili. The UN has said more than 130,000 Syrians have also fled since the Turkish operation against the Kurds began last week, including many who had taken refuge from previous rounds of fighting in the country’s eight-year civil war.

It came after president Donald Trump agreed to move US forces aside, despite the Kurdish-led Syrian Democratic Forces being a major ally in the war against Daesh.

A US military official said the situation in north-eastern Syria was ‘deteriorating rapidly’ and American forces were cut off from the Syrian Kurdish fighters.

American troops on the ground were at risk of being ‘isolated’ and cannot travel overland without a ‘high risk’ of armed confrontation with Turkey-backed forces, the official added.

Turkey’s defence ministry yesterday said its forces had taken control of the road between Hassakeh and Ain Issa, a Kurdish administrative centre. Heavy fighting was also under way in the town of Suluk.

Turkey’s official news agency said Syrian fighters allied with Ankara had captured the town, while Kurdish officials said they were still battling to hold on to it.

Meanwhile last night, Syrian government troops were said by state media to be moving north to confront the Turkish-led invasion.