You are here: Home / West Asia / Thailand warned by Russia IS militants ‘have entered’ the kingdom 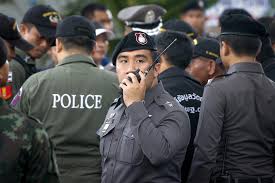 Thai police on Friday said Moscow’s top intelligence agency has warned a group of 10 militants from the self-styled Islamic State has entered the kingdom to target Russians.

A leaked letter, marked “secret” and “urgent” and signed by the deputy head of Thailand’s special branch, was widely circulated on local media late Thursday.

Thailand is a major holiday destination for Russian tourists, particularly during the peak Christmas and New Year holidays.

“They (the Syrians) travelled separately. Four went to Pattaya, two to Phuket, two to Bangkok and the other two to (an) unknown location,” the letter said, citing the information from Russia’s top intelligence agency.

“Their purpose is to create bad incidents to effect Russians and Russia’s alliance with Thailand,” the letter said, without naming the suspects.

The Russian Embassy in Bangkok could not be immediately reached for comment.

But a deputy spokesman for the Thai police said “the letter is real”.

“So far it’s only intelligence news that still needs to be proved… we have no proof if they are here for real or not,” Songpol Wattanachai told reporters.

“Please be confident (in Thailand) — we won’t disregard the intelligence.”

Thailand is in its peak holiday season when international arrivals surge, bringing huge sums of money to the economy.

Any confirmation that Islamic State militants have entered the country will likely cause panic among holidaymakers, especially in busy resort areas such as Phuket and Pattaya — both popular with Russians.

Russia launched strikes against IS targets in September.

A month later a Russian passenger plane was brought down by a bomb over the Sinai desert in Egypt killing 224 people, mainly Russian holidaymakers.

Islamic State later claimed responsibility for bombing and the November 13 attacks on Paris which killed 130 people, raising the global alarm over the possibility of further terror attacks by groups of gunmen and bombers.