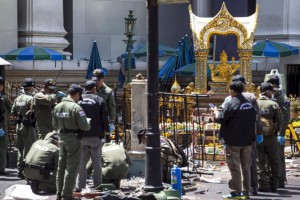 Police in Thailand say they are now certain that last month’s deadly bombing at a Bangkok shrine was related to the trafficking of Uighur Muslims from China to Turkey.

Somyot said the bombing was the result of a crackdown on a trafficking network “that smuggles Uighurs from one country to another.”

Uighurs, an ethnic minority in western China, are related to Turks, and Turkey is home to a large Uighur community.

Thai authorities have avoided calling the bombing an act of terrorism, which they fear would harm Thailand’s image as a tourist destination.

The blast left 20 people dead and more than 120 injured.