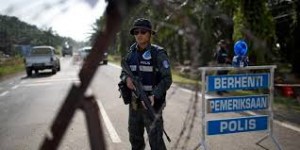 Tourist areas of the Malaysian capital are being targeted by terrorists groups, a senior minister said, following a deadly attack in the Indonesian capital Jakarta and the arrest of a bombing suspect in Malaysia on Friday.

Federal Territories Minister Adnan Mansor said Sunday the upscale district of Bangsar, the top tourist destination Bukit Bintang as well as some shopping malls were among those at risk, although police cast doubt on the warning.

“We are aware of the threats so we are on standby for any possible event,” he said. “We will look into the seeking the help of the defence department in order to secure these locations if the need arises,” Adnan said at a campaign event.

Adnan did not supply details of any specific threats, and Kuala Lumpur police chief Tajudin Isa assured tourists and the general public that the areas he mentioned were safe.

“The security at all public places have been intensified and we are doing all we can to monitor suspicious activities,” he told reporters.

Tajudin said he was not sure where Adnan received his information.

Malaysian police chief Khalid Abu Bakar on Saturday announced the arrest of a 28-year-old insurance agent suspected of plotting a “lone wolf” attack on an entertainment outlet and a government building.

The suspect, who was arrested Friday in Kuala Lumpur, allegedly received orders from Islamic State militant leaders in Syria to launch the attacks, Khalid said, without providing any details.