You are here: Home / MidEastGulf / Terrorists moved to Palmyra ‘dressed as bedouins & soldiers’ 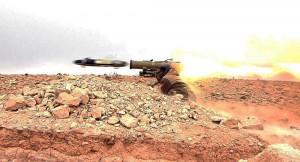 On Sunday, Daesh attacked and recaptured Palmyra, which had been liberated from the terrorist group by the Syrian army with the help of Russian warplanes in March. The ancient, UNESCO-recognized city had suffered for eight months under Daesh control, during which countless examples of priceless antiquities were deliberately destroyed, in line with the group’s aberrant interpretation of Islamic law.

Up to 5,000 militants, including hundreds of suicide bombers and dozens of vehicles, took part in the offensive.  They had reportedly relocated from Mosul in Iraq and the Syrian provinces Deir ez-Zor and Raqqa, where the US-backed Syrian Democratic Forces (SDF) had stalled their planned attack on the group. Their ability to reach Palmyra apparently undetected by regional surveillance operations has been a cause for consternation. One theory is that the fighters disguised themselves as local people, military expert Alexander Perendzhiev, a lecturer at Moscow’s Plekhanov Russian University of Economics, told RIA Novosti.

“Terrorists in Syria use sophisticated tactics to move in small groups, so-called ‘flash mob tactics.’ Under the guise of Bedouins, local people or even Syrian army soldiers, they come from different directions and meet in an inconspicuous place. As a result, suddenly there is an unexpectedly large force in one place.” “The terrorists have taken more than one city using this tactic, but we still haven’t learned to actively counteract it,” he added.

There are several important gas fields in the region of Palmyra, including al-Shaer, located some 150km northwest of the city, which reportedly produces three million cubic meters of gas a year. In addition, two important military airports, T4 and Shairat, are located near the field, and near the Palmyra-Homs road.

While the Syrian army had directed many of its resources towards Aleppo, Perendzhiev said that Daesh’s return to Palmyra was relatively predictable given its importance. “The next step after capturing Aleppo should have been the capture of these oil deposits, the oil from which goes to Arab countries – Saudi Arabia and the UAE. The terrorists’ sponsors aren’t going to give them up, that’s why they provided the resources for the attack on Palmyra. At the same time, in addition to arms, munitions and personnel support, the fighters were provided with strategic assistance,” Perendzhiev said.