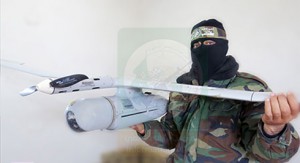 Airports and other sensitive locations throughout the United States could be atacked by personal drones, according to a new warning from the Department of Homeland Security. The “intelligence assessment” doesn’t include mention of any known threats in the U.S., though it comes after a number of incidents where hobbyist unmanned aerial devices interfered with commercial airline flights.

The DHS “intelligence assessment” cites a number of international incidents in which terrorists and roving criminal organizations deployed drones “to support illicit or violent activities.” Among them is one example where ISIS used a UAV to record video footage that was used “to support an assault” on an Iraq oil refinery in 2014. The DHS report also states that failed terror attacks inside the U.S. in recent years also relied on drones.

“We cannot rule [out] the ability of future adversaries to acquire and use a commercially available [drone] as part of an attack within the Homeland,” said the warning, which widely circulated this week.

Over the past three years there have been 500 drone “encounters” at sites around the U.S., 218 of which have been related to aviation in some way. This month there were three drone sightings at JFK airport in New York City in as many days, for instance, and the pilot of a personal aircraft needed to make a sudden swerve over southern New Jersey when he spotted a UAV 1000 feet-or-so in the air.

“While many of these encounters are not malicious in nature, they underscore potential security vulnerabilities that could be used by adversaries to leverage unmanned aerial systems as part of an attack,” the intelligence report states.