ISIS says in a statement that it had deployed suicide bomber who blew up car at checkpoint, which jihadists then raided. 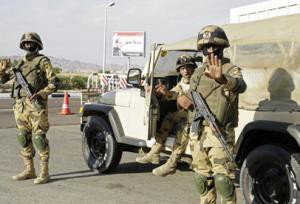 A mortar attack on a checkpoint in Egypt’s restive Sinai Peninsula killed 13 policemen on Saturday, the interior ministry said in a statement.

The Islamic State group (ISIS) claimed responsibility for the attack, but said in a statement that it had deployed a suicide bomber who blew up a car at the checkpoint, which jihadists then raided.

Security officials said five attackers were killed in clashes near the checkpoint after the attack.

The attack was the deadliest in months in Sinai, where ISIS’s Egyptian branch is waging an insurgency that has killed hundreds of policemen and soldiers.

The interior ministry said the attack took place at a checkpoint near El-Arish, the provincial capital of North Sinai.

“A mortar round was fired at the Safa checkpoint… which resulted in the martyrdom of 13 policemen,” the ministry statement said.

ISIS said a suicide bomber, identified by the nom de guerre “Abu Al-Qaaqaa the Egyptian”, blew up a car packed with explosives at the checkpoint.

“This was followed by the storming of the checkpoint,” it said in a statement posted on social media.

Sinai, a sparsely populated peninsula bordering Israel and the Palestinian Gaza Strip, has for years been a haven for Islamist militants.

After Egypt’s military overthrew Islamist president Mohamed Morsi in 2013, the jihadists launched an insurgency that has persisted despite a massive army campaign.

The militants have also attacked tourists.

The jihadist group claimed responsibility for bombing a Russian airliner in October, killing all 224 people on board, minutes after it took off from a south Sinai beach resort.

The group said it had smuggled explosives packed into a soda can on to the airplane.

That attack prompted Russia to suspend all flights to Egypt, and has lost the country hundreds of millions of dollars in tourism revenues.

The jihadists claimed that they carried out Saturday’s Sinai attack to avenge “insults to Muslim women at checkpoints”.

They had claimed other attacks were revenge for a bloody crackdown on Morsi’s Islamist supporters, which left hundreds of protesters dead after his overthrow.

Since pledging allegiance to the Islamic State group, which controls parts of Syria and Iraq, in November 2014, the Sinai branch’s attacks have grown more sophisticated.

But an apparent attempt to capture a town in Sinai last July was met with air strikes that forced the militants to flee.

The military says it has killed more than 1,000 militants, occasionally publishing pictures of their bodies.

The claims are difficult to verify, with reporters having little access to the north of the peninsula.

It has also become increasingly difficult to verify military casualties, especially after the passage of a law that bans media reporting that contradicts official tolls.