You are here: Home / Europe / Terror warning for Britons in Mediterranean hotspot months after ISIS-inspired attack

A terror attack on British tourists in Tunisia remains “highly likely” the Foreign Office has warned amid ongoing fears for the Mediterranean holiday hotspot. 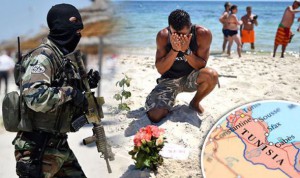 A state of emergency has been extended at the popular destination until March 22 – eight months after the massacre in Sousse and a month longer than originally planned.

In June last year a crazed Islamist terrorist killed 38, including 30 Britons as they lay on their deck chairs on the beach.

Months later, in November, Tunisian authorities said they had foiled a “major plot” to attack hotels and vital institutions in Sousse.

Fresh travel advice from the Foreign and Commonwealth Office (FCO) said terrorism remains a threat and warned travellers to be vigilant.

The FCO office said: “Further terrorist attacks remain highly likely, including against foreigners and in tourist resorts, and by individuals unknown to the authorities whose actions may be inspired by terrorist groups via social media.

“Security forces remain on a high state of alert in Tunis and other locations.

“The Tunisian President and Prime Minister have said publicly that Libya is the source of security threats, and that further attacks are likely.

“The Tunisian authorities have acknowledged the limitations in their ability to counter the current terrorist threat.

“Members of the Tunisian security forces have repeatedly been targeted in terrorist-related incidents, mainly in border areas including in the Chaambi Mountains.

“There is considered to be a heightened threat of terrorist attack globally against UK interests and British nationals, from groups or individuals motivated by the conflict in Iraq and Syria.”

Parts of the country remain completely off-limits with the FCO advising against all travel to the far south and areas bordering Libya and Algeria.

There are still no direct flights between the UK and Monastir or Enfidah airports, which are commonly used by British holidaymakers heading to sunspots on the Mediterranean coast.