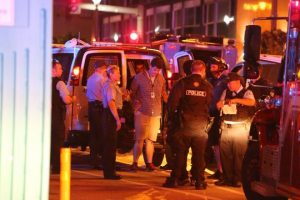 The recent attack in Las Vegas once again demonstrated how vulnerable special events actually are and how little police tactics have advanced to mitigate potential threats.  Also, the attack displayed our citizenry’s continuing unawareness of the possibility they could be caught up in a violent attack anywhere large crowds gather.  Like the Boston Bombing in 2013, the Vegas attack was carried out on an open-air location that does not have the benefit of a controlled space surrounded by stadium walls that protect the patrons from an outside attack, like reported by foxnews.com.

Like the Vegas attack, the tragic outcomes of most large domestic attacks that have occurred in the U.S. could have been mitigated using military defensive tactics in and around special events and populated areas.  Likewise, with just a little effort, most people could have dramatically improved their survival rate by increasing their awareness before attending.  Utilizing the same information as the bad guys, the patrons themselves could have made educated predictions of where, when and how an attacker may strike.

Consider the Ariana Grande concert in Manchester, England on May 22 of this year.  The attackers knew that getting a bomb inside the moderately secured (hardened) stadium would be a very difficult procedure.  Instead, the attackers determined the most effective place to carry out their attack would be the critical area outside the stadium at the main location for patron pick up and drop off at the end of the concert.  Tragically, most of those killed would likely still be alive if they had understood it was possible to conduct the same target analysis as the bad guys, utilizing the same internet information, same venue schedules and same understanding of the location at event time to determine the critical areas and critical times of that venue that should be avoided.

If citizens and law enforcement officials start to understand this attacker mindset and their methods of information collection and mission planning, they will start to ask the proper questions.  For instance: Why aren’t there counter snipers on the roofs of buildings around Las Vegas when large open-air events occur?  Why were unchecked backpacks and duffle bags allowed in and around the most populated area of the Boston Marathon in 2013?  Why do stadiums and arenas funnel tens of thousands of people through the same few exits at the end of every event?  Why are civilians and law enforcement officials always caught off guard when an attack happens as if it were the first time evil has visited our nation?  The answers to these questions lead back to the same issue in that we as a nation have failed to evolve in our awareness and defenses as fast as the attackers have advanced in their targeting and attack planning.

The days of traditional SWAT teams are over.  Police departments should shift to training the total officer capable of engaging an enemy as effective as the military would in a warzone. What is needed now is a more robust and well-trained police force capable of outside the box thinking and unconventional tactics.  Patrol officers should be outfitted and armed with long guns and body armor and trained in tactics that mimic the effective direct action techniques used by military Special Forces.  As a U.S. Navy SEAL and FBI Special Agent, I have seen how effective unconventional military tactics can be against an enemy, and how they are desperately needed in police departments across the country.

With the advent of technologies such as Airsoft weapons that mimic real life firearms in size and weight, but shoot small plastic pellets, the cost of department tactical training should have plummeted.  Yet departments continue to train their street officers on static ranges with very little real world scenarios, keeping costs high due to expensive live ammunition.  The result is money wasted and officers still lacking effective skills and ineffective battle plans.

Likewise, in order for our citizenry to remain safe and alive on a daily basis as well as at special events, it is imperative that changes occur in awareness and in the way people forward think their personal defensive tactics and response procedures.

The bottom line is that we are involved in a war that has never been encountered in modern recorded history.  It is a war that involves growing numbers of the mentally ill and people that have been brainwashed by extreme ideologies.  Combine those warfronts with the plague of learned helplessness sweeping our citizenry and you can start to get a picture of how real this new type of war actually is and how violent it has become.

It is time for law enforcement to advance forward and take some lessons from the military and at the same time, our citizenry must start anticipating the worst so they can understand the threat they are facing and be more adequately prepared to act.