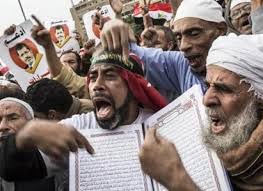 Experts in extremist groups’ affairs considered that the names mentioned in the list of terrorist individuals and entities, announced by Saudi Arabia, Egypt, UAE and Bahrain on Thursday, and which accused Qatar of supporting it, reveals the “unity of objective among extremist groups,” especially in Egypt and Libya where more than half of the terrorists in the list come from, like reported by aawsat.com.

Out of 59 individuals mentioned in the terror list, 27 are Egyptians and five are Libyans, in addition to “Saraya Defend Benghazi,” which is among the 12 entities included.

Researcher on extremist groups Ahmed Ban told Asharq Al-Awsat that the list largely shows the “similarity of the goals of these groups” such as the Muslim Brotherhood, the Egyptian Islamic Group, the Libyan Fighting Group and others.

“Leaderships of Muslim Brotherhood, in Libya and Egypt, allied themselves with extremist movements to take revenge after they lost power in both countries,” Ban added.

It seems that the common denominator between Egyptian and Libyan parties, which Qatar is accused of supporting, is their attempts to stand against the popular movement that rejects the rule of the Muslim Brotherhood and other extremist movements in the two countries over the past four years.

Shortly after the fall of former President Hosni Mubarak’s regime in 2011, the Egyptian-Qatari Preacher Yousef al-Qaradawi, 91, came from Doha to perform the Thanks prayer in Tahrir square, which the Brotherhood group occupied by force.

Qatar also kept supporting the group even after millions of Egyptians carried out protests, rejecting its rule, in June 30, 2013. After that, Qaradawi made semi-Takfiri statements inciting splits.

In Libya, Ali Salabi, 54, backed the group that managed to mobilize extremist and armed movements, including the Libyan Fighting Group, to dominate the first parliament to be elected after Muammar Gaddafi’s rule.

The Brotherhood group in Libya issued a law on political isolation and forced MPs to vote at gunpoint.

Muslim Brotherhood in Libya sought support of the Libyan Fighting Group, which is affiliated to al-Qaeda group whose most prominent leader is Abdulhakim Belhadj, 51, who is among those mentioned in the terror list.

So did the Brotherhood in Egypt through opening a wide door and seeking support of extremist leaders in the Islamic Movement, especially the branch that refused to renounce violence in the famous reviews conducted by the leaders of the group in prisons in the nineties of the last century.

The most prominent of those leaders, whose name was also mentioned in the list, is Assem Abdulmaged, 59, who has been residing in Qatar since ousting former Egyptian President Mohammed Morsi.

Thus, according to Ban, the group will witness further decline. The new list also confirms that terrorism doesn’t change, whether its title is Brotherhood or any other extremist movement, because the list included this whole spectrum.