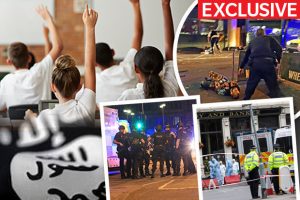 Alarming figures exposed by Daily Star Online show a shocking year-on-year increase in teachers flagging extremism fears in schools across the UK, like reported by dailystar.co.uk.

Teachers worried about radicalisation in the classroom have issued a startling 741 warnings over the last two-and-a-half years, the figures show.

In some months, up to three alerts a day were logged with Department for Education (DfE) officials, with at least one a day on average.

Experts shown the figures told Daily Star Online that the spike in alerts suggests teachers are becoming more concerned about extremism among pupils.

Issues raised by teachers include fears over radicalisation among pupils and staff members, as well as school policy towards extremist behaviour.

With kids heading back to school next week, the figures shine a damning light on the level of extremism fears among teachers.

The worrying figures were released in June – the month a trio of ISIS-obsessed terrorists massacred eight people in a van and knife rampage on London Bridge.

In that month, teachers raised the alarm about extremism on 76 occasions – the highest recorded in 2017.

Sara Khan, co-founder of anti-extremism charity Inspire, said the figures highlight how teachers are “increasingly concerned about extremism among pupils”.

Speaking to Daily Star Online, Khan said the government’s approach has been “proactive” but warned that Far Right and Islamist extremism is growing in schools.

She said: “These figures show that teachers are increasingly concerned about extremism amongst pupils in schools and are taking their responsibility of safeguarding seriously.

“They could be contacting the DfE for a number of different reasons – whether raising very specific concerns about pupils, to seeking general advice. The government’s approach has been pro-active in this area.

“When extremists – both Far Right and Islamist – target children, this is a form of child abuse and falls within a teacher’s role of safeguarding.

“There is no doubt that we are seeing a rise in both Far Right and Islamist extremism, including children expressing extremist views.

“It is vital therefore that we deal with this problem head on to ensure children’s lives and indeed their education are not ruined by extremist predators.”

The terror alerts revealed by Daily Star Online were flagged to the DfE’s counter-extremism hotline and mailbox between March 15, 2015 and June 26, 2017.

The largest number of alerts reported was in September 2016, when 63 calls and 32 messages were lodged.

June – the month of the London Bridge terror attack – was the busiest in 2017, with 53 calls and 23 emails logged.

David Cameron’s government set up the service as part of its Prevent strategy to combat extremism and terrorism.

Teachers are urged to contact the service if they are concerned about extremism in schools or a child at risk of extremism.

The service was introduced alongside advice to help teachers and childcare providers understand the Counter-Terrorism and Security Act 2015.

Under the law, authorities – including schools – have a legal duty to “prevent people from being drawn into terrorism”.

But Amanda Brown, assistant general secretary of the NUT, branded the rise in referrals to Prevent “worrying”.

She said the NUT is concerned about unfounded referrals and the danger of closing down spaces for debate in school, which may lead to radicalisation.

She told Daily Star Online: “We are concerned about the significant increase in referrals.

“We believe, however, that in a great many cases, referrals are not taken forward by the [Prevent] panels, and this in itself is an indication of a tendency to over-refer.

“That’s why the NUT is calling for a fundamental review of Prevent.

“We want government to engage with teachers on this important issue, both to keep children safe but to be mindful of the stifling effects of the programme.

“We are concerned that Prevent, in its efforts to protect, is actually closing down debate.”

A spokesperson for the DfE told Daily Star Online that the increase in phone calls does not necessarily mean extremism is on the rise in schools.

Other issues, including growing awareness of the hotline, may have led to the spike in calls, the spokesperson said.

The DfE spokesperson said: “Extremism and intolerance have no place in our society.

“We established a telephone and email helpline to provide advice and guidance to anyone with questions relating to extremism.

“Contacts with the helpline include requests for advice, resources and information as well as specific concerns about individuals.

“Where concerns are raised we will investigate further and take appropriate action.”