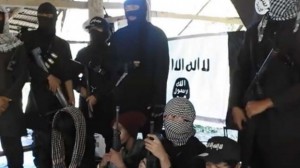 Four Islamic terrorist groups in the southern Philippines have merged to form a satellite extension of Islamic State, according to a video posted on a jihadi website.

The video purports to show militants carrying Islamic flags and the heavily armed commanders of the groups who had declared their allegiance to Islamic State leader Abu Bakr al-Baghdadi.

The groups have in the past separately claimed support for the Islamic State, but the video suggests they may have agreed to consolidate their forces, creating an even more potent threat from the lawless island region bordering Malaysia.
The groups, including the brutal Abu Sayyaf, have for years justified using violence for extreme Islamic causes, but analysts say they have presented an ideological façade to cover criminal acts, including lucrative kidnappings-for-ransom.

Ten members of one of the groups called Ansar al-Khilafah in the Philippines were killed by Philippine soldiers and police in an operation on Mindanao island on November 26.

The video posted on January 4 shows Abu Sayyaf leader Isnilon Hapilon marching with other extremist leaders who operate from bases on the islands of Sulu and Basilan.

The video has since being removed.

The United States has offered US$5 million reward for the capture of Hapilon, who has led many attacks, beheadings and kidnappings across the region over the last decade.

He is believed to have been wounded during a fire-fight with Philippine soldiers in October.

Hapilon first declared allegiance to Islamic State in a video posted on YouTube in July 2014.

Southern Philippine groups have posted several propaganda videos since November, including one threatening an imminent attack on the Asia Pacific Economic Cooperation meeting of world leaders in Manila, which did not eventuate.

One video released in December purported to show fighters at secret training camp who allege to be the “soldiers of the Caliphate in the Philippines.”

Photographs published by The Long War Journal showed jihadists undergoing weapons training with what appear to be US-made assault rifles, and other training.

The existence of a South-East Asian training camp run for the Islamic State has not been verified.

Rohan Gunaratna, a terrorism expert from the International Centre for Political Violence and Terrorism Research in Singapore told the Rappler online news site that a merger of fighting formations in the southern Philippines would present an unprecedented challenge to the government in Manila.

“Islamic State is likely to create a safe haven in Basilan and mount operations from the Sulu archipelago into both the Philippines and Malaysia.”