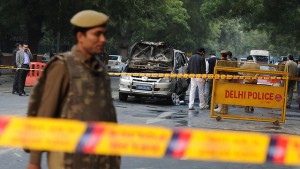 India’s intelligence agencies published a terror warning on Monday over fear of a possible attack on Isreali tourists of the Israeli embassy in New Delhi.

Local news reports said that security would be increased at the Israeli embassy as well as other Israeli and Jewish sites in light of the alert.

It was claimed in India and the alert is connected to recent reports in the country that India is deepening diplomatic relations with Israel and that Prime Minister Narendra Modi plans to visit Israel sometime in the next year.

Senior state sources in Israel said that according to current knowledge, there is no conrete threat on any specific targets. Instead, they said that the alert is periodical and happens every-so-often. A similar warning was announced several months ago.

An explosion tore through an Israeli diplomat’s car in February of 2012 in the vicinity of the Israeli Embassy in New Delhi, wounding the wife of a Defense Ministry representative.