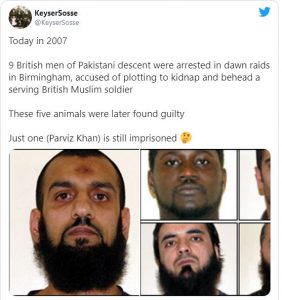 Ten of Britain’s most dangerous convicted terrorists are bidding for early release through parole, according to reports, like reported by foxnews.com.

Other cases being considered include Brits who wanted to join ISIS fighters in Iraq and convicts who posted incendiary videos online.

A Parole Board spokesman said: “Reviews are undertaken with extreme care. Protecting the public is our priority.”

There has been a major outcry over the felons’ potential release.

Chris Phillips, former head of the National Counter Terrorism Security Office, said: “Early release for any would be unthinkable, and a huge gamble with lives.”

Eilish O’Gara of the Henry Jackson Society, a trans-Atlantic foreign policy and national security think tank, added: “They must not be freed even if there is a shred of doubt.”