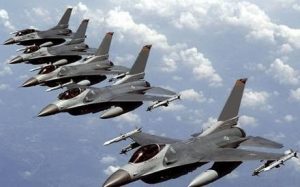 Ten Islamic State militants were killed as an airstrike targeted an alternative headquarters, west of Mosul, a local source from Nineveh province said like reported by iraqinews.com.

“An airstrike targeted an IS alternative headquarters at the outskirts of Tal Afar town, west of Mosul, killing at least ten militants,” the source, who preferred anonymity, told AlSumaria News. “The bodies were taken to the group’s medical centers.”

The source added that the group previously evacuated its main headquarters and moved to alternative ones to avoid airstrikes.

News reports said, earlier this week, that the group carried out emergency evacuations over the night at many of its main headquarters in the town over growing doubts on the people’s cooperation with security services. Other reports indicated huge explosion that occurred at a field clinic, where IS injured militants are treated in the town, which urged the group to block the main roads.

Iraqi Defense Ministry said on Wednesday that a date has been set for the town invasion, however, it will not be declared to maintain the secrecy of the intended operations.

During a weekly press briefing on Tuesday, Prime Minister Haidar al-Abadi said a special plan has been drawn to invade Tal Afar.

Col. Ryan Dillon, spokesperson of the U.S.-led coalition against IS, was previously quoted as saying that Tal Afar will be the next target of operations after victory was declared in Mosul.

Tal Afar is one of the important strongholds still held by IS in Nineveh since August 2014.