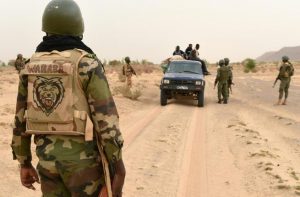 Ten Islamic militants were “neutralized” in troubled central Mali after clashes with the military, Defense Minister Tiena Coulibaly said in a statement, like reported by thedefensepost.com.

The Malian military “neutralized 10 terrorists, recovered weapons, explosive devices and other war materials,” after fighting in Karakinde in the Mopti region, Coulibaly said.

He asked locals “to continue backing defence and security forces in the fight against terrorism in all its forms.”

The Malian army has recently regularly spoken about the ‘neutralization of terrorists’ in the region but rights groups have raised the alarm, saying they were extra-judicial killings.

On May 19, the army said three Malian soldiers and 12 “terrorists” were killed in fighting at an army camp in the town of Boulikessi near the border with Burkina Faso. Locals alleged the dead were all civilians, and the army later put out a new statement that spoke of 12 “people” killed.

A military source told AFP in May that Malian troops under command of the G5 Sahel force were at the center of the incident.

Islamic extremists linked to al-Qaeda took control of the desert north of Mali in early 2012, exploiting a Taureg separatist uprising. France began a military intervention the next year that evolved into the current Operation Barkhane deployment with a mandate for counter-terror operations across the Sahel region.

Tensions and violence have intensified in the troubled area over the past three years with clashes between Fulani herdsmen and farmers from the Bambara and Dogon ethnic groups who accuse the pastoralists of colluding with jihadists.

In a report to the Security Council, Guterres said he intended to explore how the mission could broaden its political role in support of a peace process between the government and Tuareg-led rebels. A Minusma review conducted this year found that a 2015 peace agreement “had not resulted in enough meaningful progress on the ground,” Guterres said.

Guterres said that the 12,500-strong international force faced a dilemma “between the need to reform and reconstitute the Malian defense and security forces while simultaneously supporting existing forces in addressing the current instability.”

He voiced alarm about the declining humanitarian and security situation.

The U.N. Children’s Fund Unicef said in April that more than 50,000 people are still displaced by violence across Mali.