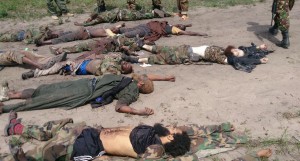 Somali military officials said Wednesday that at least 10 Al-Shabaab militants were killed in a battle in Bay region, southern Somalia.

“During the fighting, we killed 10 of Al-Shabaab fighters and burned three vehicles, and captured strategic district of Labatan Jirow which lies 60 km of Badio town, southern Somalia,” he said.

The military official also said that they are holding several Al-Shabaab militants, vowing to bring them into the justice.

Mustaf Jelle, one of the residents in Labatan Jirow district, told Xinhua that huge clashes erupted in the district.

“Government forces have been carrying out military operations in the region, and they captured Labatan Jirow after intense fighting,” Jelle said.

The Al-Qaida linked group Al-Shabaab, which is battling to topple the Somali federal government, has lost many strongholds in southern and central Somalia. But the group is still able to launch attacks in Somalia and neighboring countries.