You are here: Home / MidEastGulf / Temporary ceasefire in Yemen to begin from friday night until the end of Ramadan 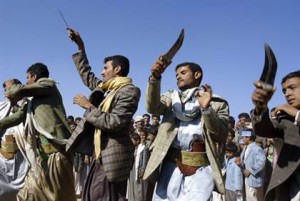 The pause in the fighting will last about a week until the end of the Muslim holy month of Ramadan, with the goal of allowing the delivery of assistance to some of the 21 million Yemenis in need.

The UN has worked intensively to broker a ceasefire to halt more than three months of fighting inside the country and Saudi-led air strikes against the Houthi rebels.

“For the humanitarian pause, we are going to start tomorrow evening and we have assurances from all the parties, and we are quite optimistic it will be respected,” Ould Cheikh Ahmed told Reuters by phone from Ethiopia, after finishing discussions in the Houthi-held Yemeni capital Sanaa.

“We have agreed to go ahead, based on two major points. The first is the commitment of all parties not to violate this ceasefire, this humanitarian pause. The second is that humanitarian assistance can reach all parts of Yemen,” he added.

Yemen’s president Abed Rabbo Mansour Hadi, who is in exile in Saudi Arabia, has asked the UN for “guarantees” to help the truce succeed, which include prisoner releases by the Houthis and withdrawals from vast areas where it is battling local fighters, according to Reuters.

A Saudi Arabian-led alliance began launching airstrikes on the Iranian-backed Houthi rebels on March 26. The airstrikes are aimed at restoring Hadi, who was forced to flee to Saudi Arabia after the rebels seized the capital, Sanaa, in September.

It is believed Iran is planning to use the Houthis to take over Yemen and seize the key strategic port of Aden, which controls the entrance to the Red Sea and ultimately to the Israeli resort city of Eilat.

Last month Yemen’s exiled government and the Houthi rebels failed to agree on a temporary ceasefire during UN-brokered talks.

The Houthis, for their part, had called for a temporary ceasefire, but the government rejected it, saying the rebels had used a previous humanitarian pause to grab more land.