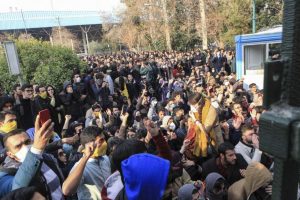 Messaging app Telegram and Facebook-owned Instagram have reportedly been restricted in Iran, following a wave of anti-government protests in the country.

Iranian ministers have claimed that social media is contributing to the protests, and was used to organise mass gatherings.

“Now is the time to stop such encouragements via Telegram,” he added.

The channel is called @amadnews.

Durov has since confirmed that the authorities have blocked the app, and it was not yet apparent if the move was permanent or temporary.

He also said Telegram had suspended the channel Jahromi was objecting too because it had broken Telegram’s terms of service.

Durov initially responded to Jahromi’s tweet stating: “Calls for violence are prohibited by Telegram’s rules. If confirmed, we’ll have to block such a channel, regardless of its size and political affiliation.”

Given the high level of media censorship in Iran, digital apps like Telegram have a large user base in the country.

Telegram has also faced recent controversy in Indonesia, where the government threatened to ban the encrypted messaging app unless unlawful content, such as radical and terrorist propaganda, was blocked.

In that particular case, Durov promised to shut down “terror related” public channels.