You are here: Home / MidEastGulf / Tehran’s options in Syria: would Iran be willing to sacrifice the Syrian regime in order to extend its influence in the region? 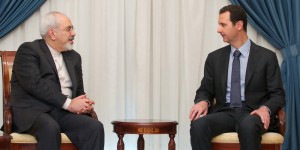 Over the past few days, there have been rumours that Iran might be willing to ditch its long-time ally, the regime led by President Bashar Al-Assad in Syria, as part of a deal safeguarding its regional reach.

However, many Syrians have discounted the rumours, saying that Tehran has invested heavily in maintaining the current Syrian regime and even boasted that without its backing the Syrian president would have been overthrown long ago.

Iran’s influence in Syria did not start with the current president, but dates back to his father, former president Hafez Al-Assad.

When the West branded Al-Assad a sponsor of terror, he turned to Iran for support, and the Damascus-Tehran axis that has developed over the past 20 years, though it may have been unpalatable to many Syrians, has often spelled survival for the regime.

Beneath the surface, however, resentments were building up. The Iranian hostility towards the Sunni majority in Syria was hard to conceal, and many Syrians were suspicious of Tehran’s regional intentions.

Hafez Al-Assad allowed Iran to influence Syrian policies, and the thin veil of the regime’s anti-Israeli resistance could not hide the peril of latent sectarianism.

When Bashar Al-Assad took power over a decade ago, Syria’s reliance on Iran increased. The stiff international sanctions imposed on Syria as a result of suspicions of regime involvement in the assassination of former Lebanese prime minister Rafiq Al-Hariri made the young and inexperienced president even more dependent on Iran’s counsel.

As time went by, Bashar Al-Assad surrendered completely to Iran, and in return for Tehran’s helping him stay in power, the Syrian president gave Iran the run of his country.

To prop up his rule, Iran gave Al-Assad weapons, sent him advisers, and mobilised Shia militias to defend him. The well-trained troops of Lebanon’s Hizbullah and Iraq’s Abul-Fadl Al-Abbas Brigade began fighting in Syria’s streets as a proxy army receiving its orders not from Al-Assad, but from his Iranian minders.

According to Syrian opposition sources, there are now 35 Shia militia outfits fighting alongside Syrian regime forces, all of them supervised by Iranians. Despite its own economic difficulties, Iran has also sent billions of dollars to prop up Al-Assad’s regime.

Over recent months, when the regime’s forces began to retreat across the country, the Iranians sent in nearly 6,000 Revolutionary Guard fighters to help protect sensitive locations. Al-Assad was becoming a facade, and Iran was turning into the real ruler of the country.

However, when Tehran defends Al-Assad it does so not primarily to keep an ally in power but to defend its own regional reach. As a result, its involvement has seemed to some like a replay of historic rivalries, as if a powerful Persian ruler was putting down an Arab revolt, or a Shia governor was suppressing a Sunni revolt.

More recently the conflict in Syria has seemed to be no longer about Syria, or resistance, or Israel, or even the West. Instead, it has seemed to be about some visceral, anachronistic enmity, centuries dormant and forgotten, and now brought back to life with a vengeance.

Syria has been being used as a pawn in a larger international game, and Iran has been controlling its destiny according to its own interests.

Haytham Al-Maleh, head of the legal office of the National Coalition of Syrian Revolutionary and Opposition Forces (NCSROF), said that “Iran is the one leading the political and military effort in the present conflict and not Al-Assad. There is no denying it. Syria is being run from the Iranian embassy.”

According to Al-Maleh, “the Iranians are trying to revive Safavid rule and assert Persian control over the Islamic world,” referring to the most powerful modern Iranian ruling dynasty, the Safavids.

Riyad Al-Asaad, founder of the opposition Free Syrian Army (FSA), said that “Iran is now ruling Syria completely. Decisions are not made by Al-Assad. He has become simply a facade for Tehran.”

The Syrian regime and Iran are both introducing “demographic changes in Syria” for sectarian purposes, Al-Asaad said.

“The Syrian regime has been giving fake IDs to Iranian fighters. Iran has Syria under its thumb. Even the forces guarding Al-Assad are from the Iranian Revolutionary Guards. Al-Assad doesn’t even trust his own sect,” Al-Asaad said.

However, Iran may have overplayed its hand. What it has won in Syria, and before that in Iraq, has alerted the Arabs to its intentions, so much so that they reacted with fury to its presumed interference in Yemen.

Throughout the Arab world, Iran is now viewed not only with the usual suspicion, but also with outright hostility.

As a result, the Iranians may have to adjust their game or risk losing everything. It is for this reason that some believe that the Iranians may now decide to cut Al-Assad loose in order to stay ahead in their regional gains.

In other words, if a regional arrangement is reached that gives the Iranians the kind of advantages they seek, they may decide to ditch Al-Assad.

This would not be totally unprecedented, as the Iranians were once intent on keeping former Iraqi prime minister Nuri Al-Maliki in office in Baghdad. But when this policy proved counterproductive, Tehran switched horses, so to speak.

Syria’s Alawites, some say, are also ready for a change, and Al-Assad’s own sect may decide to abandon its leader in order to clear its name.

As Operation Decisive Storm continues to punish Iran’s allies in Yemen, Tehran may want to cut its losses in Syria. Giving up Al-Assad may not be that hard for the Iranians if this brings them any kind of advantage in the region’s future.

Khaled Khojah, the newly elected leader of the NCSROF, thinks that it is only a matter of time before Iran ditches Al-Assad. “The FSA is not just fighting Al-Assad in Syria,” Khojah said. “It is fighting the Iranian regime.”

“Al-Assad is just a stooge working for Iran, and Tehran will soon ditch him as it did Al-Maliki before him,” he added.

“If it weren’t for the Iranians Al-Assad wouldn’t have lasted in power for the last four years,” Al-Bahrah added.

But Syrian opposition member Said Moqbil cannot imagine Tehran abandoning Al-Assad. “Al-Assad is a red line for Iran,” Moqbil said. “Iran will not give him up or accept any alternative to him.”

If Iran abandons its primary ally in Syria, it may face upheavals at home, Moqbil said.

“If Iran ditches Al-Assad, this could set off an Iranian internal revolution against the ruling group,” he said.

It is perhaps too early to expect the Iranians to give up on Al-Assad. But the possibility cannot be ruled out. For one thing, Al-Assad seems to have burned his bridges, so much so that he may not even be able to rely on the support of his own Alawite clan.

If Iran were able to trade him for other gains in an overall regional deal, it might be tempted to do so.