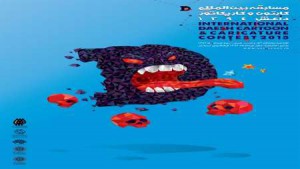 The exhibition will display 150 cartoons and caricatures by artists from 43 countries.

The artworks are among the 1,072 cartoons and caricatures submitted to the secretariat of the event.

The selected works have been chosen for better depicting the situation in Iraq and the atrocities of the ISIL terrorist group.

The ‘International Daesh Cartoon and Caricature Contest 2015’,which featured entries from around the world censuring the atrocities committed by the terrorist group ISIL in Iraq and Syria, wrapped up on May 31 in Tehran.

The event was attended by more than 50 Iranian and foreign cartoonists to promote the culture of resistance to terrorism.