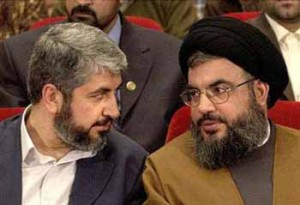 Since the deal was signed, Iran has significantly increased its financial support for two of the largest terror groups in the region that have become political players, Hamas and Hezbollah. In the years before the deal was signed, the crippling sanctions limited this support, which had significantly diminished along with Iran’s economy. But Tehran’s belief that tens, or hundreds, of billions of dollars will flow into the country in the coming years as a result of sanctions relief has led to a decision to boost the cash flow to these terror organizations.

This support, for example, has enabled Hezbollah to obtain all of the most developed arms, including those advanced technologies that many militaries around the world would envy. Al-Rai, a Kuwaiti newspaper, reported Saturday that Hezbollah has received all the advanced weaponry that Syria has obtained from the Russians. The report cited a security source involved in the fighting in Zabadani, on the Syria-Lebanon border, where Hezbollah is fighting the al-Nusra Front, the Islamic State, and other groups. One can assume that the growing Iranian support is enabling the Lebanese Shiite militia to purchase advanced weapons, including ones that were thus far outside of its reach.

The growing Iranian financial support for Hezbollah in the wake of the deal is not unrelated to other political developments in the region. The growing sense of security in Iran with regard to its political status has also been bolstered by a Russian decision to increase its involvement in Syria, and may be what drove Iran to send hundreds of members of its Revolutionary Guard Corps to play an active role in the Syria fighting.

Iran, along with Hezbollah and Moscow, has decided to dispatch sizable forces to the Syrian front to prevent the collapse of Bashar Assad’s regime.

The Shiite-Russia axis has been anxiously watching the Islamic State creep toward Damascus in recent months, and saw the territory controlled by Assad, an important ally, diminished to the coastal region of Latakia south of the capital. The Iranians and Russians grasped that not only was Damascus endangered, but also access to the Alawite regions, from Homs to Damascus — thus the urgency for intervention, including with troops on the ground.

The high morale and sense of security among the Iranians in the wake of the deal don’t stop with increased support of Hamas and Hezbollah. Today, Iran is the main, and likely only, power attempting to build terror cells to fight Israel on the Syrian Golan Heights, in areas under Assad’s control. This does not mean that the Syrian president is aware of these attempts or green-lighted them. For Israel, this does not matter. Tehran is investing more effort and money after the nuclear deal to carry out attacks against Israel from the Golan, even under Assad’s nose.

And let’s not forget the Palestinians. In the past two months, Iran has sent suitcases of cash – literally – to Hamas’s military wing in Gaza. Not everyone is happy about this, including some Hamas officials. Hamas leader Khaled Mashaal, who was always the man who controlled the money, found himself over the summer outside the circle of Iranian funding. Tehran, which was none too pleased by his visit Saudi Arabia and meeting with King Salman, decided to take revenge on him in an original way. It bypassed Mashaal and has handed over the suitcases, by way of couriers, directly to the leaders of the group’s military wing in the Gaza Strip.

The Hamas military leaders, for their part, are happy about two things: First, the money they are receiving during a difficult economic period in Gaza; second, the possibility to weaken Mashaal and his cronies, who have been lolling in luxury in Qatar and dictating to Hamas in Gaza what to do and what not to do, who to get closer to (Saudi Arabia) and who to stay away from (Iran).