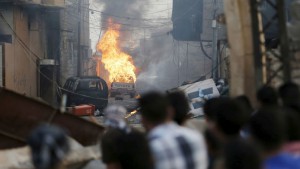 Both explosions took place in southern Kirkuk Province in the area of Shasaiwan located in the town of Khurmatu.

“First, a car bomb was detonated in the area. People gathered and that’s when the second explosion took place where a teenage suicide bomber blew himself in the crowds,” an eyewitness told Kurdistan24.

Almost all of the victims of the two explosions were Shia Muslim, he added.

Villagers believe that the Islamic State (IS) was responsible for the violence, but the group has not yet claimed responsibility.

Shasaiwan village is 10 kilometers away from the center of Khurmatu where about 300 Shia families reside.

Previously, in a statement to Kurdistan24, Masrour Aswad, a member of the High Commission of Human Rights in Iraq, said his department had acquired information that IS trained 600 – 1,000 teenagers for suicide bombings.

“The teenagers are getting trained in Mosul [northern Iraq] and Raqqa [northeastern Syria],” Aswad revealed.

According to him, their age ranges between 12-16-years-old, and almost all of them are from Iraq and Syria.

On Aug. 21, Kirkuk provincial police and security forces arrested an Arab boy clad in a suicide vest intending to detonate the explosive in the neighborhood of Tis’een.

The General Director of Kirkuk Police Forces Khattab Omar said the teenager sent by IS was born in 2001 and is originally from Mosul.

“We had information before that IS had sent suicide bombers to Kirkuk,” he said.