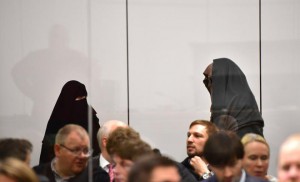 A teenage girl went on trial in Germany on Thursday for stabbing a police officer, an assault allegedly “ordered” by Daesh.

The court in the northern city of Celle ruled at the start of the proceedings against Safia S., 16, that they would take place behind closed doors because she is a minor.

The German-Moroccan national risks 10 years in prison for “attempted murder, grievous bodily harm and support for a foreign terrorist organization.”

She entered the courtroom wearing a beige headscarf and fashionable eyeglasses and spoke clearly and confidently to the judge.

Prosecutors said the teenager, who is believed to have been radicalized as a young girl, had sought to catch the attention of police officers by following them at the main train station in the northern city of Hanover.

As the officers called her over for an identity check, Safia S. allegedly stabbed one of them in the neck with a vegetable knife before being overpowered by another officer.

“We believe that the accused was motivated by members of the Daesh group in Syria to commit this act,” chief prosecutor Simon Heinrichs said.

But the teenager’s lawyer Mutlu Gunal rejected the claim, saying the link to Daesh “will not be proven.”
His client had written a letter to the wounded police officer to apologize, he said, adding that she would not have done so if she were still a supporter of Daesh.

She pledged allegiance to the Daesh in November 2015, investigators said, adding that the teenager was known to police before the Feb. 26 attack as she had sought to travel to Syria to join the militants a month earlier.

Her mother flew to Istanbul to bring her home and as they landed back in Germany, Safia S. was taken away by police and interrogated over her botched attempt to reach the war zone.

Her mobile phone was also seized, but it was not until after the stabbing assault that investigators translated the Arabic messages on the phone — which had instructed her to commit an “act of martyrdom.”

A German-Syrian man, 20, Mohamed Hasan Kharsa, went on trial with Safia S. for failing to report her plans to police.

He had sought to flee Germany but was arrested in Greece and extradited on Tuesday.