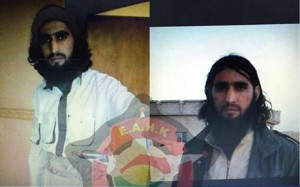 A prominent Islamic State leader behind several suicide attacks in Kirkuk was killed in a coalition air strike on Monday, said a statement from the Kurdistan Region Security Council (KRSC) – counter-terror department.

Ahmed Abdulla aka Abu Hazifa was killed at 11:45 am, together with three other militants.

Abu Hazifa was ISIS’s number one man in the Dibs district and many villages in the vicinity of Peshmerga-controlled area.

Kurdish security officials said that he was behind organizing many suicide bombers and facilitating their infiltration into Kirkuk. Abu Hafiz was a threat to the Kurdistan Region security, the KRSC statement said.

Other high-level ISIS figures have been killed in targeted attacks by coalition jets and Kurdish forces in the Kirkuk region in the past.

In mid-2015, a Kurdish cleric from Erbil named Mullah Shwan who appeared in several ISIS propaganda video was  killed in the town of Hawija south of Kirkuk.