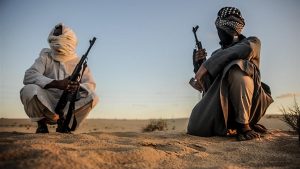 A powerful local tribe in Egypt’s Sinai Peninsula have said they have killed eight Daesh fighters and captured three more, like reported by middleeastmonitor.com.

Known as Tarabeen, the tribe regularly clashes with local Daesh-affiliated groups and attempted to confront head on the insurgency raging in the northern Sinai.

According to a senior member of the tribe, Moussa Al-Delh, the clashes broke out yesterday in the town of Rafah along the Gaza border with no tribesmen reportedly killed in the clashes.

The insurgency has been deadly for Egypt since 2013 with Egyptian security forces battling the extremist group which has operated in the northern Sinai for years.

Attacks on churches and against civilians have all been claimed by Daesh, leaving dozens dead.

Three policemen were also killed yesterday when a gunman attacked a police patrol in Cairo in a late night drive-by-shooting, the Egyptian interior ministry confirmed in a statement.