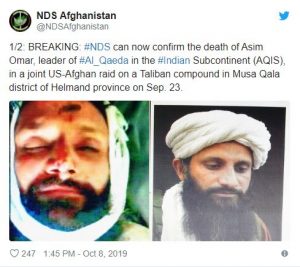 Maulana Asim Omar was a resident od Sambhal, Uttar Pradesh in India, and migrated to Pakistan in 1990.

According to a report in the AFP, Asim Omar led Al Qaeda in the Indian Subcontinent (AQIS) from its inception in 2014. He was killed during a raid on September 23.

Afghanistan’s National Directorate of Security tweeted, “#NDS can now confirm the death of Asim Omar, leader of #Al_Qaeda in the #Indian Subcontinent (AQIS), in a joint US-Afghan raid on a Taliban compound in Musa Qala district of Helmand province on Sep. 23.”

“Omar, a #Pakistani citizen, was #killed along with six other AQIS members, most of them Pakistani. Among them was Raihan, Omar’s courier to Ayman #Al_Zawahiri. They had been embedded inside the Taliban compound in the #Taliban stronghold of Musa Qala,” the Afghanistan’s National Directorate of Security further tweeted.

The raid was part of a lengthy and confusing overnight operation from September 22-23 for which the US provided air support. Authorities said they would investigate reports that 40 civilians, including children, were killed in an air strike during the operation, according to an AFP report.

The NDS said that among the six other AQIS members killed in the raid was a man identified as “Raihan”, a courier for Al Qaeda leader Ayman al-Zawahiri.

Under a stalled withdrawal plan negotiated between the US and the Taliban, Washington agreed to pull troops from Afghanistan if the insurgents abide by security guarantees and cut all ties with Al Qaeda.