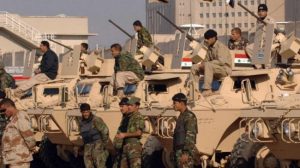 Iraqi security forces killed a senior Islamic State (IS) leader in a military operation near the Iraqi-Syrian border, a security source was quoted as saying according to iraqinews.com.

Speaking to AlSumaria News, the source identified the slain IS leader as “Abu Huzaifa al-Iraqi, who was responsible for carrying arms and explosives to his militant group.”

“Al-Iraqi was hiding inside a tunnel near the Iraqi-Syrian border when the troops stormed his hideout,” the source pointed out, adding that the military operation was launched upon accurate intelligence reports.

Security forces launched the military operation Tuesday to track down IS militants on the Iraqi-Syrian border.

The Islamic State group appeared on the international scene in 2014 when it seized large swathes of territory in Iraq and Syria, declaring the establishment of an Islamic “caliphate” from Mosul city.

Later on, the group has become notorious for its brutality, including mass killings, abductions and beheadings, prompting the U.S. to lead an international coalition to destroy it.

Although Iraqi Prime Minister Haidar al-Abadi announced in December full liberation of Iraqi lands from IS members, isolated cells believed to be linked to the militant group remain active in some parts of the country.