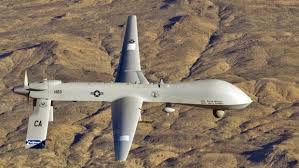 A drone strike has killed four suspected Al-Qaeda militants in southeast Yemen, a front-line in the US war on the jihadist network, a provincial official said Thursday.
The attack late Wednesday hit a car in a military camp in Al-Qaeda-controlled Mukalla, capital of the vast desert province of Hadramawt.

The official, who did not want to be named, said a local Al-Qaeda chief was among those killed.

A second Al-Qaeda vehicle was targeted on Wednesday evening in a drone strike in the town of Ghil Bawazir in the same province but there was no word of casualties, he said.

Washington has repeatedly targeted militants from Al-Qaeda in the Arabian Peninsula.
AQAP said earlier this month that its leader Nasir al-Wuhayshi, number two in the global jihadist organisation, was killed in one such raid, and named its military chief as his successor.

The jihadists have exploited months of fighting between loyalists of Yemen’s exiled government and Iran-backed Huthi rebels to consolidate their grip on Hadramawt and its capital Mukalla – a city of more than 200,000.

In the battleground southern city of Aden, four civilians were killed and scores wounded Thursday by mortar fire blamed on the Huthis, according to a medical source.

In Shabwa province, also in the south, Saudi-led coalition warplanes, which have been pounding the Huthis and their allies since March, carried out fresh air strikes against rebel-held arms depots, residents said.

Warplanes also targeted rebel positions in the nearby city of Daleh and in the oil-rich Marib province in Yemen’s east, according to witnesses.

Ground fighting and air strikes have killed more than 2,600 people across the country since March, according to UN figures, and almost 80 percent of the population – 20 million people – are in need of urgent humanitarian aid.

On Wednesday, the International Committee of the Red cross (ICRC) announced that a vessel carrying “1,000 tonnes of food and three large generators” had docked at the western port of Hodeidah, which is controlled by the rebels.