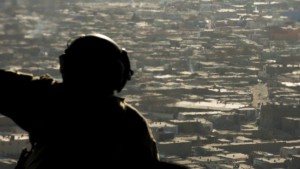 The head of the Islamic State in Iraq and Syria’s Afghanistan branch was reportedly killed in a Wednesday night U.S. drone strike.

Afghanistan’s National Directorate of Security (NDS) said Thursday that 25 militants were killed during strike the night before, including Shahidullah Shahid, USA Today reported.

A similar strike on Tuesday killed another 60 extremists. Gul Zaman, ISIS’s No. 2 in Afghanistan, died in that attack, along with his deputy.

Shahid was fired as spokesman for the Pakistani Taliban last year after pledging allegiance to ISIS instead.

His death follows renewed debate over America’s presence in Afghanistan.

“Going to a ‘zero option’ next year would be playing roulette with Afghanistan’s future,” he wrote in a Washington Post article with Brookings Institution senior fellow Michael O’Hanlon.

“The right approach for the United States is not to pull out next year but to keep several bases and several thousand U.S. and other NATO-coalition troops in Afghanistan for the foreseeable future,” they added.

“With the rise of ISIS and the distinct fighting season that is marked this year, the threat environment continues to evolve in ways that clearly, in my view, demands a reassessment of the administration’s current calendar-driven drawdown of U.S. forces with a plan that must be driven by conditions on the ground,” he said on July 4 while visiting Kabul.

American and international troops are no longer serving in combat roles in Afghanistan, instead training Afghan forces and protecting American civilians.

Many global coalition forces are additionally planning their own withdrawals from the region in 2016.

Afghan President Ashraf Ghani has long argued that ISIS is trying to gain a foothold in his nation.

He visited D.C. this spring and thanked the U.S. for helping him fight extremism during an address before a joint session of Congress.

“We owe a profound debt to the 2,315 servicemen and women killed and the more than 20,000 that have been wounded in service to your country and ours,” Ghani said on March 25.

Obama delayed the drawdown of U.S. troops from Afghanistan after Ghani’s visit.

The U.S. is now keeping 9,800 American troops there through the end of 2015. That number is nearly double the 5,000 personnel he had previously planned.