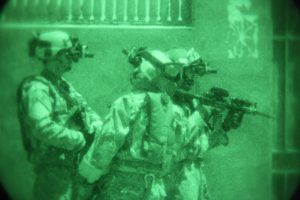 In December, US forces in Afghanistan released footage of an operation they conducted in the Taliban-dominated district of Musa Qala, in Helmand province. The grainy, black and white video showed them targeting a compound and blowing it to smithereens, with everyone inside, like reported by atimes.com.

An accompanying press statement declared that the “Taliban’s ‘Red Unit’ commander in Helmand province, Mullah Shah Wali, aka Haji Nasir, was killed in a kinetic strike.” The statement added that “one of Wali’s deputy commanders and three other insurgents were also killed.”

Helmand and Kandahar have proven to be the key provinces in the fight against the Taliban following the first wave of withdrawals of foreign troops, in 2014. Operations are being conducted with increasing frequency via NATO’s Operation Resolute Support in those areas.

What caught the attention of stakeholders involved in the operation was the reference – the first of its kind – to the Taliban’s clandestine group of highly-trained fighters. An insurgent Special Forces unit, ‘Sira Khitta’ roughly translates from Pashto to ‘Red Group’ or ‘Red Unit.’

The first reference made to the group was perhaps a month prior to the Helmand operation, when reports emerged of Taliban using high-end equipment such as night-vision goggles to conduct a successful attack on an Afghan police post in Farah province. Despite military support, eight under-equipped policemen were killed that evening, shot with laser guns.

“The ‘Red Unit’ was formed in early 2016 and has nearly 1,200 fighters in Helmand and Kandahar alone,” an Afghan security official told Asia Times on condition of anonymity. “There are also several hundred operating in Zabul province,” he said, adding that due to the furtive nature of their activities it is very hard for Afghan forces to identify them. “(This group is) so discreet that often their own operatives don’t know each other’s identity.”

Their anonymity also makes it difficult to track the group’s leadership, or its losses in battle. However, Afghan and US forces are confident that their recent joint operations did lead to the death of the Red Unit’s top commanders, thus disabling their operations, if only temporarily. “We don’t know if the replacements have been made and who is currently leading the group,” the official said.

General John Nicholson, the commander of US forces in Afghanistan, also hailed the slaying of the Red Unit commander as a major step forward in the long, drawn-out war in Afghanistan. “Mullah Shah Wali’s death will disrupt the Taliban network, degrade their narcotics trafficking, and hinder their ability to conduct attacks against Afghan forces,” he said, adding that more targeted attacks were planned to “disrupt their communications and deny them safe haven”.

Describing the specialized insurgent group the official added that its membership comprised both Afghans and foreign fighters. “From what we understand, they’re trained in Pakistan under the tutelage of retired Pakistani army generals and former ISI operatives,” he said.

Of major concern to regional stakeholders will be the group’s access to sophisticated resources and equipment. Depending on which reports are to be believed, the Red Unit is equipped with everything from night-vision goggles and Russian 82-millimeter rockets, to heavy machine guns and US-made M4 automatic carbines. It is suspected that they also carry themselves around in armored Humvees.

The security official confirmed that the unit is equipped with better weapons than regular Taliban fighters. “They are equipped with sophisticated weapons; that has given them an edge over some of the local forces, especially the Afghan police, who do not have the same resources.” There is no confirmed intelligence on how the insurgents access these weapons, however.

“The night-vision glasses and many of the weapons recovered from fallen insurgents were of Russian make. The Taliban has let it be known that they were purchased from black markets, but it is difficult to buy the latest version of this kind of equipment from the black markets on the other side of the Durand line,” the official said, referring to Pakistan’s famous wholesale arms market.

A Taliban spokesman has claimed the group’s weapons are among the “spoils of the war” stolen from Afghan forces. Interestingly, some of the arms recovered are of Iranian make, according to the official who spoke to Asia Times. This further complicates theories about their supply.

The Red Unit operates like a Special Forces unit, according to military sources. “They often focus on coordinated attacks and operations that are targeted at weakening the authority of provincial powers,” our official source explained, adding that “they often engage in face-to-face combat with Afghan security forces.” The Taliban is usually known for its guerrilla warfare and rarely engages in combat.

“They have not yet been successful in bringing down a whole province,” said the official, although he admits that the unit has caused severe damage to local forces. “We have faced losses in the Afghan army this year. We lost a lot of soldiers to them, but we believe they have also lost their top leadership.”

With the war in Afghanistan in its 17th year, the emergence of the Red Unit indicates the Taliban is far from beaten.