You are here: Home / West Asia / Talibans kill 13 Hazara Shiites on a minibus in north Afghanistan 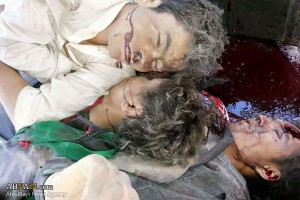 At least 13 people were killed by gunmen who attacked a minibus in north Afghanistan on Saturday, local officials said.

All victims belonged to the largely Shi’ite Hazara ethnic minority that was persecuted by the hardline Sunni Taliban during their rule in 1996-2001, said Jafar Haidari, district governor of Zari in Balkh province.

The attack began when masked gunmen stopped two small sedans in Zari district and proceeded to drag male passengers out of the cars and shoot them, said Abdul Razaq Qaderi, the deputy police chief of Balkh.

“They spared one woman who was in one of the vehicles,” he added, noting that officials were trying to determine who was responsible for the attack.

Taliban activities have been observed in the area in the past, but the group released a statement denying any involvement in the attack.

Hazaras make up the third largest ethnicity in Afghanistan. As Shiites, they are also a religious minority in Sunni-majority Afghanistan.

Nobody immediately claimed responsibility for Saturday’s attack. Munir Ahmad Farhad, a spokesman for the Balkh governor, said an investigation team had been sent to the area.

Almost 5,000 civilians died in fighting and attacks in Afghanistan in the first half of 2015, the United Nations says, attributing around 70 percent of the killings to the Taliban.

The Islamist militants were ousted from power by a U.S.-led coalition in 2001 and are waging an insurgency against the foreign-backed government.