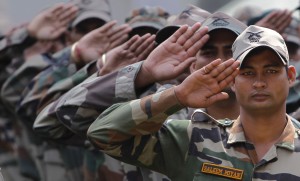 The Taliban is urging India to stop giving lethal military equipment to the Afghan government, condemning it as a “clear hostility” towards the war-torn nation.

In its first public reaction to New Delhi’s growing military cooperation with Kabul, the Islamist insurgency alleged Indian aircraft and equipment are being used to kill Afghans and destroy their homes as well as other civilian infrastructure.

“The Islamic Emirate [the Taliban] condemns this action with the strongest of terms,” said Zabihullah Mujahid, the main spokesman for the Taliban, in a statement issued Sunday.

“We call on India to stop exporting items of killing and destruction to Afghanistan and to stop efforts of prolonging the lifespan of this corrupt regime with its military aid,” Mujahid added.

He accused Afghan forces of using Indian attack helicopters to destroy a key bridge during recent fighting in the volatile northern Kunduz province.

“This cannot be interpreted as anything other than enmity with the Afghans and shall arouse hatred of the people of Afghanistan,” asserted the Taliban spokesman.

“I know that they [Afghan authorities] have asked for more of these helicopters. There is an immediate need for more. When these aircraft come in, they immediately get into the fight,” Nicholson told reporters during his August 10 visit.

India has contributed $2 billion in economic assistance for reconstruction projects in Afghanistan since the ouster of the Taliban from power in 2001.