You are here: Home / West Asia / Taliban truck bomber wounds over 70 in Afghanistan 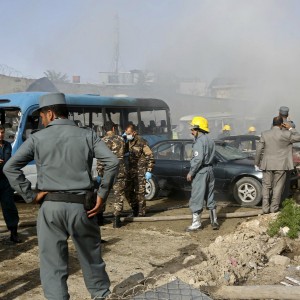 More than 70 people were wounded when a Taliban truck bomber detonated a tonne of explosives outside a government complex in southern Afghanistan, the latest in a series of attacks that have sent civilian casualties surging.

Women and children were among those hurt in the explosion in the capital of Zabul province, Qalat, which ripped off the facades of government buildings and left scattered piles of rubble.

The violence comes as the Taliban step up attacks during their summer fighting offensive despite Kabul’s repeated overtures to the insurgents to reopen peace negotiations.

Zabul’s police chief Mirwais Noorzai confirmed that more than 70 people were wounded, and said that four of them were in critical condition.

“Around 1,000 kilograms of explosives was used in the attack,” he said.

The Afghan Taliban launched their annual spring-summer offensive — titled ‘Azm’ (Determination) — in late April, vowing nationwide attacks in what is expected to be the bloodiest summer in a decade.

The group, which has been waging a 13-year war against the US-backed Afghan government, admitted they were behind the Zabul attack although no one has claimed responsibility for the Kandahar roadside bombing.

“As part of the Azm operation, this afternoon a martyrdom-seeker… conducted an attack on the provincial council, where cruel and unjust decisions against Muslims and Islam were being taken,” Taliban spokesman Qari Yousuf Ahmadi said in a statement.

Resolute Support, the NATO-led non-combat mission in Afghanistan, condemned the Zabul attack, saying in a statement it was “disgusted by the Taliban’s complete disregard for human life”.

The insurgents have launched a series of attacks in the capital and around the country as NATO forces pull back from the frontlines.