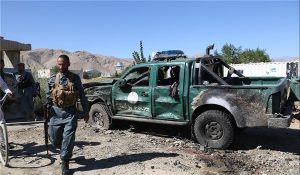 A Taliban truck bomb killed at least 20 people and wounded 95 others when it exploded near a hospital in Southern Afghanistan, an official said on Thursday.

Two provincial officials stated that the attack targeted the hospital, but the Taliban in a statement claiming the bombing said the group had targeted an Afghan security force building, according to Reuters.

At least 48 people have been killed and dozens more wounded in two separate attacks on Tuesday in Afghanistan – one at a campaign rally by Afghan President Ashraf Ghani and the other in the capital, Kabul.

Across Afghanistan, attacks have continued as the country prepares for a presidential election later this month.

The Taliban has warned that its fighters will intensify their campaign against the Afghan government and foreign forces to dissuade people from voting in the September 28 vote.

Last week, US President Donald Trump abruptly ended talks with the Taliban seeking to reach a deal on the withdrawal of thousands of American troops from Afghanistan in exchange for security guarantees from the group.

The talks, which did not include the Afghan government, were intended as a prelude to wider peace negotiations.