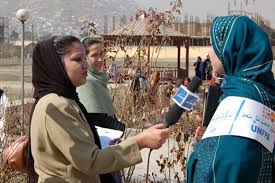 The International Federation of Journalists (IFJ) strongly condemns the Taliban for threatening to ‘eliminate’ journalists associated with two private TV channels – the Tolo TV and 1TV on October 12, 2015. The IFJ demands an end to the continuing threats made against Afghan journalists which violate press freedom across the country.

In a statement issued by the military commission, the Taliban said it ‘does not recognize Tolo TV and 1TV channels as media outlets but designates them as military objectives due to their disrespectful and hostile actions towards Afghanistan’. The Taliban also called the channels propaganda machines that ‘ridicule religious and cultural norms, encourage obscenity and lewdness, inject the minds of youth with dangerous substances such as irreligiousness, immorality, violence, gambling, intermixing and profanity’.

The statement threatened journalists saying ‘All the reporters and associates of these channels will be deemed enemy personnel, all of their centers, offices and dispatched teams will be considered military objectives which will be directly eliminated’.

The threat came in response of the TV channels’ coverage of the recent invasion of Kunduz, a city in northern Afghanistan by the Taliban in late September during which the TV channels reported that the Taliban fighters raped women in hostels.

The Tolo TV said it wouldn’t bow down to the threat. In a statement issued on October 13, it said: “We believe the Afghan people expect the Afghan media not to bow to such threats and to continue on their mission of informing people based on journalism ethics. Media organizations are not one of the warring sides, but civilian organizations. Whenever the Taliban or any other group has complaints, they can adopt peaceful means, because any attack on media and journalists is considered a war crime.”

Tolo TV also announced that they would boycott coverage of news related to Taliban and called on the Afghan government, national and international organizations to extend support to Afghan media and journalists, making their security and immunity a top priority.

The Afghan media industry stood in solidarity with the channels and collectively said they would not bow to the threats of the Taliban.