You are here: Home / West Asia / Taliban suffer casualties in ISIS attack in East of Afghanistan 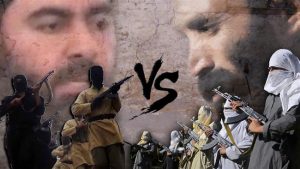 The Taliban insurgents suffered casualties in the latest attack of the loyalists of the Islamic State of Iraq and Syria (ISIS) terrorist group in eastern Nangarhar province of Afghanistan, like reported by khaama.com.

According to the local officials, the ISIS militants launched an attack on Taliban insurgents in Mullah Village of Chaparhar district late on Tuesday night.

The officials further added that the attack erupted an infighting that left at least three Taliban insurgents dead and three others wounded.

In the meantime, the provincial government media office in a statement said a member of the ISIS terrorist group was killed in an airstrike conducted in Haska Mina district late on Tuesday night.

At least one ISIS member was also wounded in the air raid which was conducted in Payin area of the district.

On the other hand, a clash broke out between the Taliban insurgents and Afghan forces in Bati Kot district on Tuesday which resulted into the killing of a Taliban local leader while another Taliban member was wounded.

This comes as Afghan security forces are busy conducting counter-terrorism operations against the IS and other insurgent groups in this province.

The US forces based in Afghanistan also support the Afghan forces in their fight against the terrorist groups and often carry out airstrikes to suppress the insurgency of the terror groups.

The increased raids by the Afghan and US forces followed rampant activities by the IS and other groups to expand their insurgency in this key eastern province.